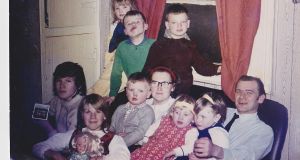 Martha Campbell, front row, first from left, with her parents and siblings in a rare family photograph the Christmas before she was killed. Her brother Tony is behind her right shoulder. Photograph courtesy Campbell family

When 13-year-old Martha Campbell was shot dead on a Belfast street in May 1972, there was no investigation.

Decades later, a report by the North’s Historical Enquiries Team (HET) would remark, with some incredulity, that it was “difficult to imagine” such a scenario, yet this was exactly what happened.

“There are no records that there was any significant inquiry into the circumstances [of her death]; if there was, details of it have not survived,” the report found.

This initial lack of investigation – which meant no ballistics or forensic evidence was recovered – has hampered attempts to find out who killed her, with the HET concluding that Martha “was caught between a three-way gun battle involving loyalist paramilitaries, republican paramilitaries and the [British] army.”

However, new evidence uncovered by Ciarán Mac Airt, from the investigative charity Paper Trail, confirms for the first time that a British army unit was in the area – and fired shots – at the time Martha was killed.

The schoolgirl had gone out to visit a friend and was walking along Springhill Crescent in west Belfast when shots were fired and she was fatally wounded.

British army logs uncovered from the UK’s National Archives and which have been seen by The Irish Times place members of the 1st King’s Regiment in the Moyard area at 8.30pm on the evening of May 14th.

This is contrary to the findings of the HET, which said 1st Kings had been on duty nearby but had been relieved at 7.10pm. Based on papers supplied to them by the British Army, the HET said, there was “no evidence to place the army in Moyard Park at the time when Martha was shot”.

The logs also confirm that members of the regiment fired shots, with 1st Kings reporting at 8.30pm that it had been “firing for some minutes”. There is no record of any other firing in the area.

Later that evening, at 9.15pm, 1st Kings reported to army headquarters that 23 rounds had been fired at “gunmen” between 8.30pm and 8.55pm from the Moyard area. At 9.20pm the log noted the death of Martha Campbell from gunshot wounds, and a time of death of 8.30pm. “Circumstances not known,” it added.

Martha’s brother Tony Campbell described the discovery as a “breakthrough” which could finally lead to the answers the family has been seeking for almost 50 years, “to get closure on what happened to our sister, Martha, and [find out] who murdered her”.

He said that, based on eyewitness accounts, the family had always believed the British army was responsible, but “after the HET inquiry I thought there was nowhere else to go, there was nothing concrete in terms of evidence”.

“This is evidence that can prove it was the 1st Kings Regiment who was in Moyard flats. They fired shots at the time and into the place where Martha was.

“They never disclosed this at the original inquest, we never knew anything about this, so as far as I’m concerned this has been covered up and one would have to ask the question why. Why was it never disclosed?”

Mr Campbell said it now raised the hope for the family that they might now be able to find out more information about their sister’s killing, and potentially secure a new inquest.

“Even if we don’t get closure, at the very least I hope to get answers to our questions,” he said.

A spokesman for the Ministry of Defence said his thoughts were with Martha Campbell’s family, and anybody with information should bring it to the police.