Court ruling has major implications for reporting on killings of children 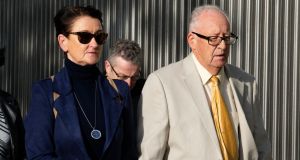 The media would not have been able to give the coverage it did to Ana Kriégel’s parents, Geraldine and Patric, if this interpretation of the law had been in place. Photograph: Tom Honan

The decision of the Court of Appeal that the media cannot name a deceased child victim of crime, because of a provision of the 2001 Children Act, is likely to create some striking anomalies in the future.

The ruling applies, or is triggered, by court proceedings, in that it only comes into effect once a person is charged.

It now seems that if the whole nation is talking about a murdered child, the publication of his or her name will come to a sudden halt once a person has been charged.

If the circumstances of the crime are such that the identification of the person charged might in turn identify the victim, then media reports of the charge would be also forced to leave out the identity of the person accused.

It seems it is now the case that strangers to a child who are convicted of killing them can be named, but not persons who are close relatives, lest their being identified might in turn identify the victim.

The prohibition on naming the child victim persists, beyond the completion of the trial process.

In the case of Ana Kriégel, for instance, the media would have had to stop naming her once the boys who were convicted of killing her were charged, and would still be prohibited from naming her.

The media would not have been able to give the coverage it did to Ana’s parents, Geraldine and Patric, who did so much at the end of the trial to explain their love for her, thereby providing a counterweight to the darkness of a murder that had caused such generalised distress.

Another instance where the ruling is likely to change how the media operates appears to be where an adult who was raped or sexually abused as a child by a family member and wants to allow their identity be revealed, so their abuser can also be named.

It now appears that to do so would be a criminal offence, even though the public naming of the perpetrator might be something wished for by the victim and might be of assistance to others.

None of this is to criticise the Court of Appeal. The three judges who delivered the ruling are very highly regarded.

Barring a successful appeal to the Supreme Court, the ball is back in the court of the Oireachtas. It can amend the 2001 Act to change what was presumably an unintended consequence of its wording.

But the media’s confidence in the ability of the Oireachtas to quickly progress necessary legislative reforms in their industry is pretty low.