Taoiseach says ‘unfettered access’ to adoption records would be difficult 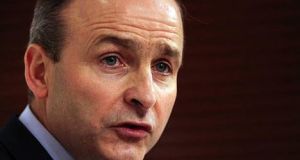 Taoiseach Micheál Martin: “In relation to any dark chapter from our past, I want openness, I want transparency, and I want honesty – and I want to shed a light on that.” Photograph: Getty Images

The Government wants to introduce legislation to offer children held in Mother and Babies homes greater rights to adoption records, but “unfettered access” will be difficult, Taoiseach Michael Martin has said.

Mr Martin has faced criticism from campaigners and victims in the wake of last week’s passage of legislation to transfer records created by the Commission of Investigation into Mothers and Babies’ homes to the child and family agency, Tusla.

Asked about the tracing of birth parents by adopted people, Mr Martin said that he intended to bring back to the Dáil legislation introduced but not passed by the last government to clear the way for greater access.

However, he acknowledged difficulties that exist providing “unfettered access” to the records for people whose birth parents may not have wished to be traced. Instead, he favoured offering “as much access as possible”.

“Our position is towards favouring access but one cannot ignore the privacy argument either,” said Mr Martin, who said this is “exactly the area” that the Minister for Children, Roderic O’Gorman and officials are currently attempting to tease out.

Asked if he favoured changing the current legal balance between access and privacy – where the right not to be traced trumps the right to access the records – Mr Martin said: “That was the core point in the last Dáil and the Minister is looking at that afresh, in terms of what mechanisms can be deployed to rebalance that . . . Our position is towards favouring access but one cannot ignore the privacy argument either. But that is exactly the area that the Minister and his officials are working on.”

New legislation would come to the Dáil in the new year, he said.

Mr Martin again denied there was any intention by the government to limit access to information or hide away the secrets of the past.

Rejecting charges that the Government is trying to seal records, he went on: “From my perspective as Taoiseach of this Government, in relation to any dark chapter from our past, I want openness, I want transparency and I want honesty – and I want to shed a light on that.”

“From my perspective as Taoiseach of this Government, in relation to any dark chapter from our past, I want openness, I want transparency and I want honesty – and I want to shed a light on that,” Mr Martin said.

He said that was the intention of the records legislation passed last week. The records, he said, would have been destroyed if the legislation was not passed.

“My objective is to get that out there and have that published as quickly as we can,” he said.

He said he could not put an exact timeline on it, but he wanted the information published as quickly as possible.