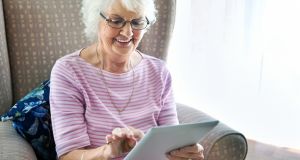 The World Health Organisation predicts 22 per cent of the global population will be over 60 by 2050. Photograph: Getty Images

Public commentary during the Covid-19 pandemic has revealed “ageist attitudes”, a Galway charity which works with older people has said.

Cope Galway, which also works with the homeless and victims of domestic abuse, said older people, and the over-70s in particular, face loneliness and isolation which has been compounded by restrictions related to the Covid-19 pandemic.

In a statement in advance of the publication of its annual report, the charity said: “Some public commentary during this time has revealed ageist attitudes, inappropriately biased language and ageist terms within certain contexts.”

Cope Galway saw a 20 per cent spike in demand for its services last year, assisting 2,984 people. It will host an online session with UN special rapporteur on the protection and promotion of human rights Prof Fionnuala Ní Aoláin on Monday to launch the report.

Speaking in advance of the event, keynote speaker Prof Ní Aoláin, who is regents professor and robina professor of law, public policy and society at the University of Minnesota, said the charity had brought attention to the specific needs and rights of older people while affirming their dignity.

“Not only are older people an important group supported by Cope Galway, but the volunteer community – the heartbeat of Cope Galway’s work – are significantly made up of older adults.”

Referring to recent research emerging from NUI Galway, Ms Horan said there is concerning evidence that older people are portrayed as “mass consumers of valuable and limited resources that block treatment for younger, healthier and seemingly more productive individuals”.

“This devalues the status of older people as equal citizens and the perceived value that we place on their contributions, and their lives, in our society.”

“As a global society, there are more and more of us experiencing the privilege of ageing. By 2050, according to the World Health Organisation (WHO), 22 per cent of our global population will be over 60… achieving equal access to healthy ageing requires concerted global, national and local action – and a decisive end to ageist attitudes.”