Cabinet to consider report on tendering process from independent auditor

In a speech to the Dáil, Minister for Communications Denis Naughten said the Taoiseach told him he does not have confidence in him and as a result has resigned from his position. Video: Oireachtas TV 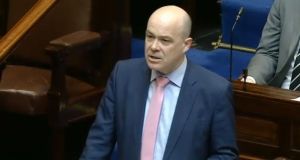 Former minister for communications Denis Naughten did not influence or seek to influence the conduct of the broadband tender process in favour of Granahan McCourt Capital, or otherwise, the independent auditor found.

Former minister for communications Denis Naughten did not influence, or seek to influence, the tender process of the national broadband plan during meetings with the sole remaining bidder, a report to be published on Tuesday is expected to say.

The Cabinet will on Tuesday consider a report from independent auditor Peter Smyth into the tender process for the State’s rural broadband scheme. It will be published after the Cabinet meeting, with Minister for Communications Richard Bruton expected to make a statement.

The Roscommon TD resigned amid controversy over meetings he held with David McCourt, the American businessman heading up the Granahan McCourt consortium which is the sole remaining bidder for the plan.

Sources said the report has found that Mr Naughten did not influence or seek to influence the conduct of the tender process in favour of Granahan McCourt Capital, or otherwise. It is also understood to make a similar finding with regard to Granahan McCourt chairman David McCourt and his meetings with Mr Naughten.

The report is understood to be about 50 pages long and deals with meetings held not just between Mr Naughten, his staff and officials and Mr McCourt but with all previous bidders for the plan.

At the time of his resignation, Mr Naughten was strongly critical of Mr Varadkar, who had asked his former Fine Gael colleague to consider his position. Mr Naughten is expected to make a statement later on Tuesday.

Pat Breen, the Fine Gael Minister of State who also came under pressure because of his dealings with Mr McCourt, is in Nairobi attending the Sustainable Blue Economy conference this week.

The publication of the report is anticipated to clear the way for the national broadband plan to proceed, despite some misgivings in government about its cost, which is understood to be nearing €3 billion. However, it is seen as extremely difficult politically not to proceed with the long-promised plan.

It is not yet clear if Mr Bruton will on Tuesday declare that the scheme as envisaged should proceed.

The future of the national broadband plan is also expected to feature in the ongoing talks between Fine Gael and Fianna Fáil on the review and possible renegotiation of the confidence-and-supply deal.

The talks are set to resume on Tuesday, with three sessions expected to take place this week. The parties will pick up where they left off last week, with a focus on the Department of Transport, and sources said the broadband plan could also be discussed this week.

Fianna Fáil has consistently said health, housing and broadband are its three areas of interest in the talks.