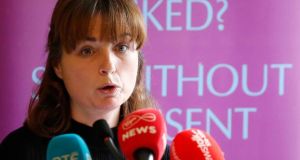 Rape survivor Lavinia Kerwick has called on the gardaí, judiciary and politicians to be as brave as she was 25 years ago when she waived her right to anonymity, and make the changes needed to treat victims and survivors compassionately.

Speaking at the publication of the Dublin Rape Crisis Centre’s 2017 annual report Ms Kerwick said a “flawed” justice system left victims of sexual crimes “sitting alone and wondering why [they] ever reported” the crime.

The Co Kilkenny woman was 19 when she was raped in 1991. After her ex-boyfriend pleaded guilty and received a suspended sentence, she campaigned publicly against how she had been treated in court. In the lead-up to and after the trial she developed severe anorexia.

“In all honesty the justice system broke me,” she said on Monday. “Victims sit in that courtroom hidden away in a corner . . . There is no eye contact with the judge so you are somewhat invisible. It very nearly killed me. So I went public and I suppose exposed the court system for the first time, and how that system treated victims.”

Addressing Garda Commissioner Drew Harris, who attended the publication, she said: “Looking back now I was brave and that is what I need you to be, Commissioner. We are now at a crossroads and victims are crying out for change. I am going to now hand you back my bravery and ask you to go to the Minister for Justice, the judicial system, the rape crisis centres, victims and survivors and say: ‘Let’s work together. Let’s be brave. Let’s never again hear a rape victim leave court saying: ‘He might as well have raped me again’.’

“We survivors and victims deserve to be able to live our lives and heal. To do that victims need to trust the system and, when reporting rape, victims need to know they have done the right thing. It takes all our courage.

“There is no legal representation for victims and that needs to be addressed. Stop talking about what we wore. Rape is rape. We said ‘No’. What we wore should be no excuse for rape.

“We will always remember what the rapist wore. It is ingrained in our memory forever . . . belts to restrain you; gloves to put in your mouth so you can’t scream; jeans to carry a knife. It’s as clear as day the system isn’t working . . . Listen to the voices of survivors and victims. We have a fountain of knowledge.”

He urged victims of sexual crime who had not yet reported it to come forward. “We will listen, we will support you and we will investigate,” he said.