Brexit a catalyst for some UK applicants, 312 of whom received citizenship on Monday 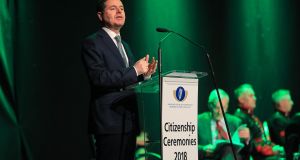 Minister for Finance and Public Expenditure and Reform Paschal Donohoe speaking at the citizenship ceremonies at the Killarney Convention Centre. Photograph: Valerie O’Sullivan

Some 3,000 people were conferred with Irish citizenship at emotional ceremonies in Killarney, Co Kerry on Monday.

Among the new Irish citizens who took an oath of allegiance to the Irish State, was the English-born wife of Minister for Finance Paschal Donohoe.

Mr Donohoe gave the address at the conferring ceremony at the second of the three ceremonies which saw his wife Justine Davey sworn in at the Killarney Convention Centre.

Neither he or his wife wanted to give a comment to the press, they said.

In his address, Mr Donohue said it was a “great privilege” to participate in the event. “Becoming a citizen of one’s country goes to the essence of our democracy and constitutional principles.”

Some 312 people from the United Kingdom became Irish citizens at Monday’s ceremonies, the second highest grouping after Poland (586) and ahead of Romania (280).

The convention centre in the Gleneagle Hotel has been designated by the Department of Justice and Equality as the new home for citizenship ceremonies, taking over from the Convention Centre Dublin.

People from 120 countries took park, among them Michael Sean O’Gorman for whom Brexit was a catalyst.Sound designer to the Riverdance show, he lives in Co Wexford with his partner the singer Eleanor McEvoy.

“I felt committed because of Brexit,” Mr O’Gorman said.

He did not know what to expect from the ceremony which was introduced in 2011 by then minister for justice Alan Shatter both to address a backlog in cases and to take citizenship out of District Courts to a more suitable setting.

“I feel so moved. When they (the army) presented colours on stage , tears came to my eyes,” said Mr O’Gorman.

He added Minister of State at the Department of Justice David Stanton, who officiated at the morning ceremony, and retired High Court judge Mr Justice Bryan McMahon who administered the oath, “were great”.

Friends Randy Mazingu (23) originally from the Congo, and working in Google, and Nathan Adams (23) originally from South Africa and now a care assistant in a Dublin hospital, were overjoyed and congratulated each other as they posed for pictures after the first ceremony.

Encouraging the new Irish to contribute to their communities, “perhaps through sport”, Mr Justice McMahon drew a spontaneous round of applause when he reminded the audience that Irish rugby manager Joe Schmidt “of Irish rugby”got his citizenship in one of the 138 ceremonies that have now taken place - “and you can’t deny his contribution to sport in this country.”

The Kerry-born judge added: “We are a nation of emigrants. We understand emigration and, now more than ever, we have sons and daughters who have had to emigrate and who live abroad but with your help we will rebuild our economy and welcome them back.”

This is the second occasion when large scale citizenship ceremonies have been held outside of Dublin.Details of future ceremonies and the process for applying for citizenship are placed on www.inis.gov.ie