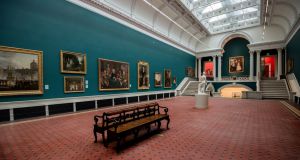 The Dargan Wing, the oldest wing of the gallery, after it was newly refurbished in 2017. Photograph: Brenda Fitzsimons

Sections of the National Gallery on Dublin’s Merrion Square were closed on Tuesday after a light fixture fell and smashed in one of its historic wings.

Both the Milltown and Dargan wings of the gallery, which house works from Irish artists including Roderic O’Conor, John Lavery and Jack B Yeats, as well as European collections, have been impacted by the incident.

It comes after both underwent extensive renovations in the early part of this decade.

The Dargan Wing was closed in 2011 while the Milltown Wing shut its doors to the public in 2014, with both reopening just over two years ago.

In a statement, the National Gallery apologised for the temporary closures and said an issue had arisen after a “light fitting in one of the galleries became detached from the lighting track and dislodged”.

It said no staff or visitors were injured as a result of the incident and a detailed inspection had taken place.

The gallery is awaiting the results of that inspection after which proposals for resolving the issue will be implemented.

The gallery said there would be an update when new information was available and added that it “sincerely regrets” any inconvenience caused to visitors as a result of the closure.

Much of the gallery remains open and works including those by Caravaggio, Vermeer, Yeats and Rembrandt have been moved to areas which are still accessible.