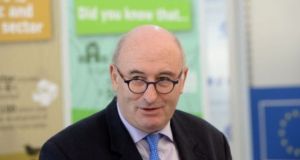 The Government has nominated Phil Hogan, Ireland’s EU commissioner, for a second term in Brussels.

The Taoiseach confirmed his intention to nominate Mr Hogan following a Cabinet meeting on Tuesday morning.

“Phil is widely respected in Brussels and across the EU as a skilled negotiator and someone who builds alliances.

“He has also been a very important voice on Brexit, ensuring that his colleagues in the Commission have a keen understanding of the potential negative impact that the UK’s exit will have on Ireland and other Member States.

“His re-nomination is an endorsement of his work to date, and an indication of the importance we place on our engagement with EU institutions,” Mr Varadkar said.

Mr Hogan, who has been Agriculture Commissioner for the past five years, has been tipped for a heavyweight post in the new Commission, with speculation in Brussels centring on the trade portfolio.

This would be especially relevant to Ireland with a trade deal due to be thrashed out with the UK once it leaves the EU.

Although she must be approved by the vote of the Parliament, expected next week, it is expected that countries will scramble to nominate their Commissioners in the hope of securing important portfolios.

With each of the 28 countries nominating a commissioner, many of the portfolios have limited powers and importance.

However, Mr Hogan, who has held the important agriculture job for the last five year, would be expected to land one of the important roles in the Commission, and he is reported to be interested in trade.

In recent days, he has strongly defended the EU’s Mercusor trade deal with south American countries, despite criticisms from the farming lobby and opposition politicians at home.