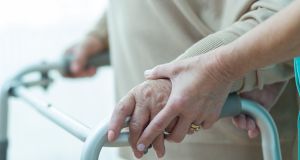 Irish adults spend more than 30 hours a week on unpaid care provision and housework, the third-highest level in Europe according to new research.

The report, which trawls more than a decade of available data, focuses heavily on a significant gender gap – 45 per cent of women provide care for children and older adults compared to just 29 per cent of men.

“Caring and Unpaid Work in Ireland” was jointly published by the Irish Human Rights and Equality Commission (IHREC) and the Economic and Social Research Institute (ESRI) on Tuesday.

It identifies a “significant and persistent imbalance in Ireland between men and women”, even among those doing the same amount of paid work.

Both men and women in Ireland rank third in terms of unpaid work hours out of 28 members states. Women are only behind Romania and Malta while men fall behind Latvia and Romania.

In 2016, Irish women actually topped the list for levels of unpaid domestic work in the EU. Research quoted in the report suggests the value of “informal adult care” in Ireland is between €2.1 billion and €5.5 billion.

Emily Logan, chief commissioner at the IHREC, said Ireland’s performance “reflects the State’s low involvement in support for caring and sees Ireland more in line with southern and eastern European countries than with countries like Scandinavia or western Europe”.

“If we accept the public good that (care provision) serves then we need to create the conditions in Ireland where unpaid work is recognised, is valued and is equally shared.”

The report was deliberately published ahead of the forthcoming Citizen’s Assembly examination of co-responsibility for care within the family.

Ms Logan also used it as an opportunity to reemphasise the IHREC’s view that Article 41.2 of the Constitution – generally viewed as an anachronism dealing with the woman’s place in the home – be amended rather than discarded completely to reflect “a long overdue recognition of the public good realised within Ireland’s families and in caring roles”.

The Irish gender disparity in domestic work narrowed significantly in the period between 2007 and 2011 but widened again once employment began to return to the economy. This was a “recessionary shock rather than long term change” in men’s behaviour, the author’s argue.

Helen Russell of the ESRI, the report’s lead author, said such unpaid work was rarely measured and often underestimated.

“In Ireland we have the seventh highest gender gap in hours of unpaid work per week,” she said. “The gap is still universal even in those (better performing) countries but there is a wide variation in that gap. And those countries are where they have policies and a welfare regime that is much more geared towards supporting joint caring.”

In Ireland women spend almost 11 hours more per week on care (of both children and older adults) than men, a gap that narrows to just over seven hours when controlled for age, family status, education and employment. For housework, the gender gap is 10.5 hours.

Bernie Bradley, a social inclusion officer at Monaghan County Council and the parent of a daughter with Down Syndrome, said care responsibility can weigh heavily on families but the nature of its provision has shifted.

“In that same time the population of people over the age of 65 has increased by 19 per cent.

“People are living longer. . . but the people who traditionally looked after them, mostly women, are not available in the way that they used to be available. Families are smaller.”

The report argues policy change is required to restructure caring so that it is “more valued and equally shared”.