‘Nóra darling, I love you. Mum is here’ – voice played on speakers in search for missing Irish girl

"Mummy's here, love. I know you are there", this is the recording a Malaysian search and rescue team played to look for Nora Quoirin in dense forest reserve, nearly one week after the teen was reported missing. Video: Reuters 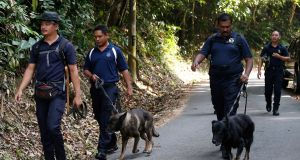 A voice recording of the mother of missing Irish teenager Nóra Quoirin was played by police on loudpeakers in the Malaysian jungle as the fifth day of the search took place yesterday.

Several local media outlets reported that in the recording, being played near the Dusun resort in Negeri Sembilan where she went missing, her Belfast-born mother Meabh said: “Nóra darling, I love you. Mum is here.” The voices of other relatives have been recordehd so that they can also be used.

Search-and-rescue teams have been using local trackers and members of special forces in their continued efforts to find the missing 15-year-old, who has learning and developmental disabilities.

The family have said they remain hopeful after police leading the investigation refused to rule out a “criminal element” in the search for the girl.

Nóra arrived at the resort about 63km south of Kuala Lumpur on Saturday for a two-week holiday with her family –mother Meabh, her French father Sebastien and her younger brother and sister. The family is based in London but the teenager is understood to have been travelling on an Irish passport.

Her father raised the alarm at 8am on Sunday when she was not in her room, and her family believe Nóra was abducted. They insist she would not have wandered off alone in the middle of the night.

The force has analysed fingerprints found in a resort cottage from which Nóra was reported missing. Deputy police chief Che Zakaria Othman said investigations were ongoing to identify the fingerprints which were at an open living room window, not in the bedroom upstairs where Nóra was sleeping with her siblings.

Police added they were “not ruling out any possibility” and that they believed Nóra was still in the area. Initial reports that a window in Nóra’s bedroom was opened were corrected by police.

Divers have been searching the river that runs through the forest, and drones and a helicopter have been deployed in the search effort. Indigenous Orang Asli people are helping in the search, and trackers from the Senoi Praaq special unit, which is made up mainly of Orang Asli, have been called in to assist.

In a statement her family said: “We must remain hopeful.Nóra is still missing, and she is very vulnerable, and we need to do everything we can to bring her home.”

Nóra’s relatives have expressed their deepest gratitude to the Royal Malaysian Police, the search-and-rescue teams, and the emergency services “for all they have done for us in this difficult time”. They are “completely overwhelmed” by the support they have received from all over the world and welcomed the assistance of French, British and Irish police.

While Malaysian police continue to say the case is officially that of a missing person, and that there is no evidence of foul play, they are ruling nothing out and are liaising with Interpol.

The Malaysian authorities have been criticised for inaction and even incompetence in the past, specifically in the case of Malaysian-born Australian citizen Annapuranee Jenkins, who went missing in 2017.

But in the case of Nóra ’s disappearance about 250 search-and-rescue personnel have been deployed and about 20 people have been interviewed. Sniffer dogs have not picked up any trace of Nóra other than in the immediate vicinity of the Dusun resort guesthouse where the Quoirin family have been staying.

The eco-resort is located in a durian orchard in the foothills of the Titiwangsa mountains and is next to the 4,000-acre Berembun forest reserve, which is a popular attraction for hikers wishing to scale Gunung Telapak Buruk – the highest mountain in the vicinity. There are sun bears, white-handed gibbons, macaques, wild pigs, panthers, tapirs, and barking deer living in the Berembun reserve and locals have seen leopard tracks.

The Star newspaper in Malaysia reported yesterday that the total number of people reported lost in the Malaysian jungle so far this year was significantly higher than in each of the past three years.

Fire-and-rescue department operations director Abdul Wahab Mat Yasin said that, in the first seven months of this year, there were 252 cases of people reported missing in the jungle.

The case of the disappearance of Jenkins, who went missing in Penang on December 13th, 2017, is still unsolved. She had taken an Uber and was due to visit her 101-year-old mother in a care home, but got out of the car ahead of her destination and has been missing ever since. Her relatives accused the police of inaction. The Uber driver was not interviewed, her relatives say, and reported sightings were not investigated.

While foreigners are among those who have disappeared hiking, Malaysia is generally seen as being safe for tourists. – Additional reporting: PA