Garda was sacked in 1982 over ‘alleged homosexual activity’, Harris confirms

Former garda says he sees correspondence from commissioner as a vindication 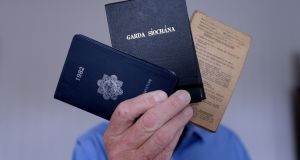 A former Garda member who has campaigned for years for the force to admit he was dismissed because he was gay has now been told by Garda Commissioner Drew Harris that his “alleged involvement in homosexual activity” was the issue.

“A document has been located at the Department of Justice and Equality and provided to me, and indicates that your services were dispensed with in advance of your position being confirmed due to suspicions of your alleged involvement in homosexual activity,” Mr Harris has now said in a letter to him.

The former garda’s case was reported on by The Irish Times last month when he outlined how he was questioned twice about being gay back in 1982.

Weeks later he was preparing to leave his Garda station one evening when senior members of the force came to the station and sought him out. They demanded he take off his uniform and informed him his time in the force was over.

The former Garda member, who was in his early 20s when dismissed 37 years ago, has never come out as gay to those around him, and prefers not to be named. He believes his experience at the hands of the Garda was so severe he has felt the need to conceal his sexuality.

On Wednesday night he told The Irish Times he “welcomed” the correspondence from the commissioner, and saw it as a vindication. He now wanted a meeting with Mr Harris over the matter.

The commissioner has informed him additional searches for more documents were being conducted, adding he would make contact again soon. Mr Harris offered him a meeting with the Garda’s head of human resources as an interim measure.

Last month, when his story was first highlighted in The Irish Times, the man at the centre of the case said he believed his mixing on the gay scene had been observed by detectives in early 1982.

The force had placed gay pubs and clubs under surveillance as part of the investigation into the murder of Charles Self, a gay RTÉ set designer murdered in a house in Monkstown in January 1982.