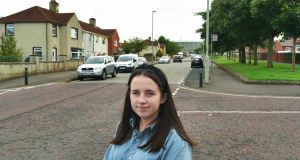 Caoimhe O’Reilly: “There’s so much has happened elsewhere in the world, and it’s good to see how they’ve got over things and dealt with them”

The streets of Derry’s Creggan estate are a long way from the tree-lined campus of The Lawrenceville School, New Jersey.

One of the United States’ top high schools, each year it welcomes two students from Northern Ireland on a scholarship programme; this September one of them will be 18-year-old Caoimhe O’Reilly.

A US screening of the Irish documentary A Mother Brings Her Son to Be Shot –  a film by Sinéad O'Shea about a mother from Creggan who takes her teenage son to be shot in the legs by dissident republicans – convinced the scholarship committee that one of their next beneficiaries should be from the area.

Less than a week later the journalist Lyra McKee was killed by the New IRA. The street where she was shot is only a few minutes’ walk from O’Reilly’s home. She and her friends were off school for the Easter holidays.

“We talked about and it, my friends were saying how we didn’t understand how it could have happened. To bring a gun out in a place full of teenagers, even kids – it could have been anybody who was shot.

“I wasn’t born when the Troubles happened, so they didn’t affect me – though obviously they affected my family – but to be 18 and suddenly trying to understand how this could have happened, it was just scary.

“People were saying how we were taking a step back. I’m going away to America now, and when I come back could this be worse? Or could this be better?”

O’Reilly has much to look forward to. A former student at St Mary’s College in Derry, she is awaiting her A-level results and had planned to go to university in Liverpool to study quantity surveying. She laughs when The Irish Times asks why she decided to go to the US.

“What, apart from the fact that it’s a once in a lifetime opportunity?”

She shows photographs of the school. It is quintessential Ivy League; former pupils at the private day and boarding school include US senators and governors, the former CEO of the Walt Disney Corporation and a past president of the American Stock Exchange.

O’Reilly and her father Kevin Doherty both work at a local hotel; they prepared for her interview on the drive to work.

“I was asked about my family, and school and the subjects I did and who inspires me, and then I was asked about the Troubles and how it affected our family, and my opinion on Brexit. That was the hardest, because at that stage it was really confusing and I was trying to follow it,” says O’Reilly.

Their conversations in the car worked; Doherty stresses that he has always talked openly with O’Reilly and her younger brother, not least about the murder of McKee.

“We would talk a lot about aspects of the political situation,” says Doherty. “I explain to Caoimhe that now things have changed. That where before if somebody was shot nobody would have said anything, now we’re at a different stage and everybody condemned it. There was so much support for the police over it.”

As a parent it is simple. “I explained to them that it’s about right and wrong, and obviously they know about the Troubles, but it’s about showing them that there’s a different way.

“It’s a lot to do with opportunities. I’ve always said to Caoimhe, you need to know what you’re going to be at the end of it, you need to see your goal.

“I think a lot of the youth, they might fall behind in their schoolwork, and then it’s just like a snowball effect. Once they become distant they become more susceptible to that [dissident] sort of mindset and they can be easily manipulated.”

O’Reilly has seen this for herself first hand. “There are friends I had in fourth year, and I realised they weren’t good to be hanging around with. I realised I needed to get out of that situation and focus on my work, and when I look now they’re not doing so well. I took myself out of that bad situation, whereas they didn’t.

I think everybody in Derry kind of lives in a bubble, and it’s good to get out of it

In the wake of the murder of McKee, much has been written about the problems of Creggan – the lack of employment, the lack of opportunities, the lack of hope among its young people, all of which, it is argued, lead some teenagers to fall under the sway of older dissident republicans.

Yet in Creggan there is widespread concern that the entire area has been publicly condemned for the actions of a few, and that decades-long progress in peace-building and economic regeneration has been ignored in favour of sensationalist headlines.

Her mother Sabrina is Creggan born and bred; her own mother lives two streets away. “Had she [Sabrina] had her way we would have lived on the same street,” says Doherty. This is typical of Derry; a house in Creggan is much sought after.

“I sound like my father,” says Doherty, “but when I look around now at all the new housing developments, I can remember when they were all fields.

“The council and the government are trying, and I can see where there are younger politicians coming through now who have fresh ideas and who weren’t part of the Troubles.

For O’Reilly those concerns are clear. “It’s just to see something different from Derry. You never forget history, you have to learn from it. But we’re a new generation, and we’re trying to learn from those mistakes and try to grow together rather than grow apart so that it doesn’t happen again.

“I think everybody in Derry kind of lives in a bubble, and it’s good to get out of it. There’s so much has happened elsewhere in the world, and it’s good to see how they’ve got over things and dealt with them. That’s why I want to travel after I get my education, and make a good future.”