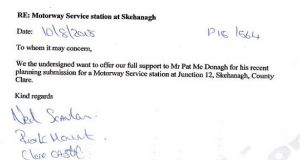 Edward and Freda Scanlon of Rockmount, Clarecastle, near Ennis in Co Clare can only have been bemused at the letters that arrived at their home, dated August 16th, from Clare County Council planning department.

“A Chara,” they begin in timeworn fashion, before going on to acknowledge receipt of their submissions on the proposed motorway service station mega development about four kilometres outside Ennis, and also the €20 fee that must accompany all such submissions.

Edward and Freda’s alleged submissions were received by the Council on August 14th. Identical, they are hardly a work of poetry. “We the undersigned want to offer our full support to Mr Pat McDonagh for his recent planning submission for a motorway service station at Junction 12, Skehanagh, Co Clare.”

Kind regards, they conclude, above what purports to be Freda’s signature on one, while the other is signed “Ned Scanlon”. Both submissions appear to feature the same handwriting and the acknowledgement of them from the council prompted the real Edward and Freda Scanlon to write back to the local authority on on August 16th stating that they wished to have their names removed from the planning application.

The Scanlons alleged observations supporting Mr McDonagh’s application are among close to 190 such submissions, a number of them quite clearly genuine.

Many, however, followed the template evident in what purported to be the Scanlon’s submissions.

In an email to the council, published on its website, another local woman Eileen Fahy complained that both she and her husband Michael Fahy had had their signatures forged on letters purporting to support the service station plan.

“When I asked why the Council had not suspected fowl play at such a high volume of submission being lodged by one person I was told that the submissions were signed. This means that my signature and that of my husband’s have been forged”, the email states.

According to local sources, 180 objections were submitted to the Council in one bulk delivery shortly before the deadline for submissions, which was August 14th. Who delivered them is not known but it was a single individual and each submission contained the requisite €20 fee.

The proposed development is the brainchild of Pat McDonagh, the man behind the Supermac’s franchise. He achieved national (if not international) prominence with his Barack Obama Plaza, a motorway service area and fast food emporium off the M7 at Moneygall in Co Offaly.

The plan with Clare Council shows the Ennis development would have parking for around 100 cars and 24 heavy goods vehicles (HGVs) or touring coaches. Ennis is a gateway to both the Cliffs of Moher and also Donald Trump’s Doonbeg golf resort – a proximity that prompted Clare wits to nickname Mr McDonagh filling station plan as Trump’s Pumps.

But Ennis established business interests are worried. They see dining for close to 300 people in a range of eating and retail outlets as deeply threatening to their town-centre operations.

Among them, the Petrogas Group, which runs the Applegreen fuel station outlets, has asked the Council to turn down the application because of its size, scale and alleged failure to take into account the impact it would have on retail outlets in the area.

However, the bulk of the submissions on file are in support, many of them coming allegedly from the Clarecastle area which is sandwiched between Ennis and the motorway junction.

But many appear to be expressions of fake views – support for the project submitted in the name of people who didn’t, in fact, make a submission.

By Tuesday 40 people had contacted the Council in response to letters of acknowledgement sent to them to say they never made a submission nor paid €20. Each has been told to send in a note of withdrawal which will be recorded on the planning application file.

A total of 11 had followed through and done this, including the Scanlons whose withdrawal signature is clearly different from their alleged submission.

“Clare County Council encourages any other individual who has received a submission receipt and who does not wish to be associated with the planning application to contact the local authority in writing confirming their position,” the Council said in a statement yesterday.

This may be done by email (planoff@clarecoco.ie), by post (Planning Office, Clare County Council, New Road, Ennis, Co. Clare) or by delivering a letter directly to the Planning Office front desk.

The proposal has divided local media with the Clare People seen as largely supportive of the plan while the Clare Echo and Clare FM being more questioning.

Either way, however, the €20 submission fee is un-refundable, even if the alleged submission is withdrawn. So the Council gets to keep the €3,600.

In an initial comment, Supermac’s said there was “considerable local support for the planned development” and said the essence of planning was participation and debate.

The company noted that in the case of the motorway service development proposal, “ the public has engaged with the process to an admirable extent”.

In a fresh comment on Wednesday morning following a report in The Irish Times, the company said it initially became aware, through Clare FM radio station, that some people allegedly making supportive submissions to the planning department had withdrawn them.

The statement continued: “Today’s reports that a number of submissions to the Planning Authority purported to be made by a number of individuals were not in fact made by them is shocking to the company.

“If such be the case the company utterly condemns such action. Supermac’s disowns such support for its planned development.

“The company remains committed to the delivery of an outstanding motorway service area at Kilbreckan.”