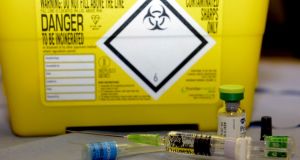 A measles vaccination kit. Information on measles has been sent to all emergency departments and GPs in Dublin, Kildare and Wicklow to inform them of this outbreak. Photograph: Owen Humphreys/PA Wire

The HSE is dealing with a measles outbreak in north Dublin, with 13 cases recorded in adults and children in the north inner city area since July.

Transmission has occurred in Dublin hospitals and in households with poor vaccine uptake, according to the Department of Public Health East.

It said it is now starting to see people who acquired measles in the wider inner city community. There have been no deaths from measles associated with this outbreak to date.

Information on measles has been sent to all emergency departments and GPs in Dublin, Kildare and Wicklow to inform them of this outbreak.

Dr Ruth McDermott, public health doctor said: “Measles can be a serious illness and is highly infectious. The best protection is to be fully vaccinated with two doses of MMR vaccine.”

Measles is a highly contagious disease that is spread easily. The time between exposure and developing a rash is usually 14 days, although it can range from seven to 21 days.

However people are infectious from four days before a rash begins to appear, and until four days afterwards. Measles can cause chest infections, seizures, ear infections, swelling and potentially, damage to the brain.

Symptoms include a high fever, coughing, runny nose and red eyes. The red rash associated with the condition begins on the head and spreads down the body. This normally starts a few days after the onset of illness.

The HSE has advised anyone who thinks they may have measles to stay at home and phone their GP for advice. People who are sick should not attend any congregated settings such as crèche, school, work or religious gatherings until they have recovered from illness.

There are ongoing outbreaks of measles in many countries in the European region and worldwide, with 31 deaths associated with the disease in the EU so far this year. Most of the cases in the EU have been recorded in Romania, France, Greece and Italy.