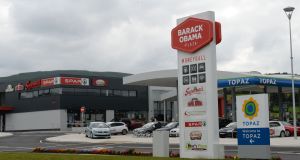 Supermac’s, the fast food franchise behind a proposal to build a large motorway service station near Ennis, Co Clare, has said it is shocked that submissions purportedly in support of their planning application are in fact fake.

In a statement on Wednesday morning, the company says it condemns such action.

The planning application, lodged with Clare County Council in July and on which a decision is expected early next month, is for a filling station forecourt and restaurant outlet at Junction 12 on the M18 near Ennis.

The plans lodged with the application show the Ennis development would have parking for around 100 cars and 24 heavy goods vehicles (HGVs) or touring coaches, and space for multiple eating and/or retail outlets.

The Ennis area is a thoroughfare for many people en route to both the Cliffs of Moher and US president Donald Trump’s Doonbeg golf resort, prompting some local wits to nickname the proposed service station Trump’s Pumps – an apparent allusion to Supermac’s popular Barack Obama Plaza at Moneygall in Co Offaly.

However, shortly before the deadline closed for observations to be made on the plans, Clare planning department received a single drop of some 180 individual submissions, all of them in support.

As a result of the council sending letters of acknowledgement to the apparent submitters, and acknowledging also their payment of €20, some people contacted the Council to say that they had not made a submission and that the signature on a template letter of support was not theirs.

By early this week, around 40 people had contacted the Council, 14 of whom followed up by formally in writing withdrawing their fake views on the planning application.

All the purported submissions of support, and those that have been withdrawn in writing, are available on Clare Council’s website, under the planning section.

In an initial comment, Supermac’s said there was “considerable local support for the planned development” and said the essence of planning was participation and debate.

The company noted that in the case of the motorway service development proposal, “ the public has engaged with the process to an admirable extent”.

In a fresh comment on Wednesday morning following a report in The Irish Times, the company said it initially became aware, through Clare FM radio station, that some people allegedly making supportive submissions to the planning department had withdrawn them.

The statement continued: “Today’s reports that a number of submissions to the Planning Authority purported to be made by a number of individuals were not in fact made by them is shocking to the company.

“If such be the case the company utterly condemns such action. Supermac’s disowns such support for its planned development.

“The company remains committed to the delivery of an outstanding motorway service area at Kilbreckan.”

A council spokesman said today that there had been no further withdrawals from among the 180 submissions of support for the application. A decision on the application will be made according to planning considerations, as set out in law.

Husband of Jean Eagers charged with her murder 06:33
BT Young Scientist & Technology Exhibition to go virtual in 2021 06:00
Researcher contracts under strain as economic recession looms 06:00
One-meter rule means all students may not return to school in September 02:46
Open Ireland as soon as possible - Tourism chief warns of 'catastrophic' impact of pandemic 02:39

1 Bobby Storey: The IRA's planner and enforcer who stayed in the shadows
2 Full line up of junior ministers unveiled as Taoiseach accused by one TD of snub
3 Who are the new junior ministers? All their profiles are here
4 Open Ireland as soon as possible - Tourism chief warns of 'catastrophic' impact of pandemic
5 Leaders spark anger as they look west for junior minister carve-up
Real news has value SUBSCRIBE