Primate of All Ireland Eamon Martin replaces US cardinal for keynote 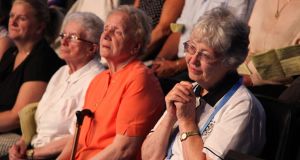 Attendees at the World Meeting of Families listening to Pope Francis speaking via video in the RDS Dublin on Tuesday night. Photograph: John McElroy

Thousands of people are expected to attend the World Meeting of Familes which starts in Dublin on Wednesday and culminates in an open-air mass celebrated by Pope Francis in the Phoenix Park on Sunday.

The event will hear from a variety of speakers on issues such as family, homelessness, migrants and refugees, safety in the digital age and marriage.

Primate of All Ireland and Archbishop of Armagh, Eamon Martin is delivering the keynote address at 2.30pm. The theme of his talk is “The Welfare of the Family is Decisive for the Future of the World”. Archbishop Martin replaces Archbishop of Washington Cardinal Donald Weurl who withdrew from his scheduled appearance.

He had been heavily criticised for his handling of child sexual abuse allegations in the Pennsylvania grand jury report. Cardinal Wuerl was bishop of Pittsburgh, Pennsylvania, from 1988 to 2006. The report of the grand jury, which was published last week, found “wholesale institutional failure that endangered the welfare of children” in Pittsburgh.

A full programme of events at the World Meeting of Families event is available here.

On Tuesday, Archbishop Diarmuid Martin greeted families in the “variety of their expressions” at the opening prayer service of the event.

“There are some who would look at the world meeting as some sort of ideological rally to celebrate a type of family which probably does not exist,” he said, but added that the event was, in fact, much more profound.

“The family is not a remote ideological notion but the place where compassion, kindness, gentleness, patience and forgiveness are learned, practised and are spread,” he said.

Hundreds of people crowded into the RDS auditorium for the service that officially began the six-day event.

Opening ceremonies took place simultaneously across the 26 dioceses in Ireland with the lead event in Dublin.

Archbishop Martin reflected briefly on the nature of families and how they had changed over the years, with different opportunities and challenges in the modern world.

He spoke of the importance of the power of love to restore the church and society. “We commit ourselves to help young people understand what love truly means,” he said.

“And we pray for those who have never experienced such love or for whom such love was stolen through abuse or neglect.”

Outside the auditorium, organisers were putting the final touches to preparations for the coming days’ events. Stall holders were setting up as members of the public and clergy ambled about the grounds. Tents lined the venue with signs pointing to everything from designated prayer space to a teen global village.

The crowds streaming into the opening service were a mixture of nationalities and profiles – clergy and older members of the church walked alongside young families pushing prams.

“It’s just wonderful to see this kind of expression of faith; to see all of these people arriving,” said Bridin Gilroy from Dublin.

Like many of those arriving, she believes the ongoing scandal has cast a shadow over proceedings but does not shy away from addressing it.

“Particularly this week with the unfortunate events announced in America which has been terrible,” she said.

Frank McKevitt from Cork too was enthusiastic by the volume of people attending.

“We think Ireland is the epicentre of the Catholic world but we are just a tiny speck,” he said, of the event.

While there was an “avalanche” of negative media in the run-up, he believes the pope is doing his best to address the controversies that continue to grip his church.

“He will appoint people of a like mind and it will take a slow progression. If he is there for another five years, I think we will have a different church,” he said.

Isaac Withers, a young Catholic due to speak at an event on issues affecting his generation of church-goers, acknowledged there was a challenge to attracting new members.

“It’s big. I think when you look at statistics from the States, a lot of people who leave and have left in university, it’s usually because they disagree with something or they aren’t spiritually fulfilled,” he said. “And [those things] are not impossible things for the church to speak to.”