‘I’m very much half Zambian. It is half of who I am’ 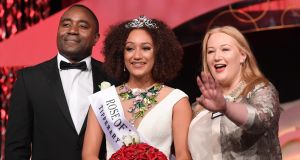 Kirsten Mate Maher’s father, Kwalo Mate, and her mother, Jacinta Maher, joined her on stage after she was crowned the Rose of Tralee. Photograph: Domnick Walsh

On Monday Kirsten Mate Maher was offered a place at the Waterford Institute of Technology (WIT) to study multimedia and application development with a view to become a web designer.

On Tuesday evening she became the 60th Rose of Tralee - the first African-Irish woman and at 21 years of age, one of the youngest winners of the competition.

There was an air of serenity about her on Wednesday morning at odds with the detritus around her in the reception suite and the rather sheepish-looking other Roses who were up early.

She was initially the favourite with the bookies to win from a long way out. “I don’t think that means much (being the favourite),” she said.

On the contrary, the bookies have had an uncanny knack of picking the winner in recent years.

Then she was joint favourite with the Carlow Rose Shauna Ray Lacey, whose tour de force in the Dome on Monday when she spoke about her parents who had succumbed to heroin addiction captured the hearts of the nation.

Ms Maher has her own powerful story to tell. Her father, Kwalo Mate, was an army officer from Zambia; her mother Jacinta is from Waterford. They met while her father was training in the Curragh and he went on holidays in Waterford.

He had to return to Zambia just before his daughter was born and he did not see her until she was almost two. “I still have the teddy bear he gave me,” she said.

Her parents joined her on stage after she won. Her mother spent the night staring up at the ceiling. She couldn’t sleep.

A hockey-playing, half-Zambian Rose from Mullinavat, Co Kilkenny but living in Waterford city is as good a summation where Ireland is at as anything else.

She has stressed that there is much more to her than her skin colour and afro hairstyle. Neither is she the first mixed-race Rose - Luzveminda O’Sullivan won in 1998 and Clare Kambamettu in 2010.

Nevertheless, she is proud of her Zambian heritage, though her Zambian relatives have a hard time understanding what the Rose of Tralee is all about. “They think I’m a princess.” She laughs.

“I’m very much half Zambian. It is half of who I am. I get the privilege of having two amazing cultures.

“Ireland is an amazing country with so many different cultures and different people from all parts of the world,” she said.

“It’s so important to embrace that. There are so many different types of Irish people. We are immigrants, we are everywhere.”

Ms Maher is making no rash decisions about her future. She is not that type evidentially, but she will have time to reflect on her win.

MBA Options 2021: Spotlight on courses around the country 01:02
The A-Z guide to negotiating the MBA process 01:00
Thousands of higher education places available for people reskilling 01:00
New guidelines on personal injury awards to take effect ‘within weeks’ 01:00
What was the best thing the MBA had to offer you? 01:00