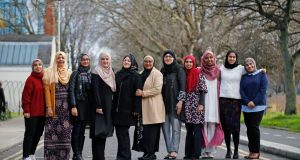 Muslim women in Ireland have urged non-Muslims in their communities to “look beyond the veil” and to see beyond negative stereotypes of the hijab.

Irish Muslim women and men gathered for a breakfast event on Friday to celebrate World Hijab Day, which is marked around the world on February 1st.

The event was hosted by Muslim Sisters of Éire, a voluntary organisation which provides support to women (in particular Muslim women), and to encourage integration.

Chair of the organisation Lorraine O’Connor from Dublin converted to Islam in 2005 from a predominantly Catholic background.

“I noticed when I became Muslim and I started wearing the hijab that there was quite a lot of hostility so I decided to wear my hijab and to be Irish I needed to kind of be proactive,” she said.

She and others established Muslim Sisters of Éire in 2010 with a mission to “break stereotypes” and to combat negative public discourse, she says.

One of its visions was to bring Muslims together on World Hijab Day to celebrate the wearing of the veil.

“It’s about women coming together and celebrating that they wear their hijab and they are doing talks and educating people, helping them understand because there is a lot of public discourse out there and there are a lot of people who don’t like hijab,” Ms O’Connor says.

“It’s the most controversial piece of cloth in the whole of Europe at the moment. It’s helping them to understand, to look beyond the veil at who we are. We are women underneath this veil, so don’t judge me for the veil I’m wearing, judge me for the woman I am.”

Also speaking at the event was Amilah Ali, a second generation Muslim woman from Dublin. She works in the women’s community welfare department of the Islamic Cultural Centre of Ireland.

“Many people focus disproportionately on the head covering...forgetting the person who is underneath the veil,” she said.

She told guests it was important to “look underneath the surface” and to find out more about Muslim women within their community.

“It’s not just about the dress, it’s also about how we conduct ourselves as Muslim women. I feel that it’s important for us to leave a legacy behind us for our daughters, for those young women within our communities, so that they feel that there is no fear in wearing the hijab and also that they are not just defined by the hijab.”

Sarah Babiker from Naas, a student of history and political science in Trinity College Dublin, said she and her friends got empowerment and freedom from their religion.

“We believe that our religion gives balance between all aspects of ourselves, our body, our soul, our mind, between men and women.”

The first annual World Hijab Day was marked on February 1st 2013 in recognition of millions of Muslim women who choose to wear the hijab and live a life of modesty.

It was established by New York resident, Nazma Khan, who came up with the idea as a means to foster religious tolerance and understanding by inviting non-Muslim women to experience the hijab for one day.