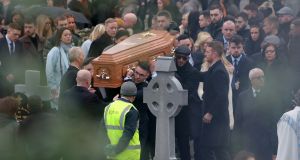 The stories told about Zach Parker at his funeral on Thursday drew heavily from childhood, a glaring reflection of his youthful age when he was shot dead earlier this month.

The 23-year-old was remembered as a playful friend; the symbols left at his coffin included childhood shoes; the voice of his younger brother Cillian, barely tall enough to reach the podium microphone, crumbled as he delivered his reading.

Parker’s girlfriend Hayley, fighting through tears, told the congregation how he had been her first love; she his “one true love”.

Two weeks ago, Parker was leaving a gym with a friend in the north Dublin suburb of Swords when he was shot multiple times in a targeted assassination and left to die in the carpark.

He had been involved with drugs and while it was a gangland hit, the young man was a relative unknown to gardai investigating serious criminality.

Gardaí believe his killing was linked to the local drugs trade rather than a more high profile criminal feud. He became the third person to be killed in Ireland this year.

His funeral, noticeable for the overwhelming amount of young men and women turned out in black, reflected on the popularity of a man whose premature death was still, apparently, sinking in.

“They say when you are missing one person the whole world seems empty,” Hayley told the family and well-wishers who had squeezed into St Colmcille’s Church in Swords,, Dublin taking up every corner and the gallery above.

“All the memories we made together; I never for a second thought that this would be the end of us.”

Parker’s coffin was carried inside from the bitterly cold Thursday afternoon shortly after 11am as the church bells began to toll outside. It was heaved onto the shoulders of young men - a number of whom wore peaked caps, sunglasses and long dark jackets. They were followed by tearful family members who made their way up to the empty rows of seats by the alter.

Fr Paul Thornton explained the items that were carried forward, a combination of poignant and light-hearted symbols of a short life. Parker’s first and last shoes, the motorcycle helmet, hair clippers from his passion for barbering, teeth whitener and a Nando’s bag - the favoured restaurant from where he would regularly be seen buying food in the nearby Pavilions shopping centre.

If these items testified to youth, his cousin Keli’s stories, told on behalf of his family, reinforced it.

She recalled his being chased around the kitchen with a wooden spoon, his morning grumpiness and his love of dogs and cars; she mentioned childhood hobbies.

“I think one of the most generous things Zach has given us is our memories of him. And how lucky we are to say that Zach William Parker is ours and how proud of him we are,” she said.

Earlier in the service, Father Thornton said the act of violence that had taken his life was out of context with the lives of the community.

“Our hearts are troubled because something like this happened so easily on an ordinary Thursday evening,” he said.

“These are the hearts that are most troubled because this day two weeks ago their lives were changed forever.”