Mother (25) who died following crash in Co Donegal is named 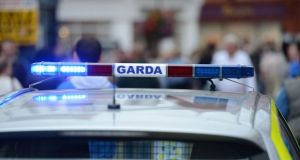 The road is currently closed and local diversions are in place. Photograph: Frank Miller

The latest person to die on Irish roads has been named locally as a 25-year-old mother of a three-year-old girl.

Clarice Rice became the second person to die on Donegal’s roads over the Christmas period in less than 48 hours.

Ms Rice was the driver of a silver Vauxhall Carlton car which went off the road at Drumfad Lower, Portsalon at around 11.30pm on Friday night.

A male passenger in the car was taken to Letterkenny University Hospital but his injuries are not life-threatening.

The stretch of road between Kerrykeel and Portsalon where the accident happened has been the scene of a number of fatalities in recent years.

Garda collision investigators are at the scene of the crash in a bid to establish how it happened.

Investigators are also trying to establish where Ms Rice and her male passenger had been in the hours leading up to the crash.

Ms Rice, who was from Portsalon, is the seventh person to die on Donegal roads so far in 2019.

Just two days before this crash, a young man father-of-two in his early 30s was killed at Porthall on the outskirts of Lifford. Shaun Kelly’s car left the road and crashed into a field. He survived the initial impact but died a short time later at Letterkenny University Hospital.

Garda Superintendent Eugene McGovern is the officer who has been in charge of both fatal accidents.

He appealed to anybody who may have seen the English-registered Vauxhall Carlton car leaving the village of Kerrykeel and heading towards Portsalon on Friday evening to contact them.

“Unfortunately, this is my second fatal collision to be investigating in less than 48 hours and it is just very sad.

“The female driver was killed instantly at the scene after her car left the road and struck two trees.

“We are appealing to anybody who may have seen this car traveling from the village of Kerrykeel towards Portsalon on Friday night to get in touch,” he said.

Superintendent McGovern said that before the Christmas period figures locally for Donegal for road fatalities had been down compared to the national upward trend.

He added “I have seen more than my fair share of road fatalities over the years and unfortunately I have now seen two more in the space of just two days.”

He appealed to people to take extra care on the roads for the rest of the holiday period.

“I would just ask them to slow down, not to drink or use drugs and always wear their seat belts. Following these guidelines will drastically reduce the risk of a fatal road collision.

“We have enough sadness on our roads in Donegal already this Christmas time without any more,” he said.