State papers: Handwritten note says playwright’s tomb was ‘in a mess’ and suggests Irish stonemasons be sent to clean it 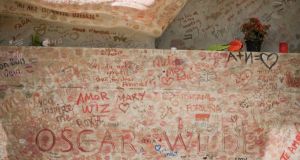 Oscar Wilde’s tomb at Père-Lachaise cemetery in Paris had long been daubed with graffiti by adoring fans and a cult grew up around leaving lipstick kisses on the monument.

Oscar Wilde’s grave in Paris was in such a “mess” three decades ago that the government was urged to send Irish stonemasons to clean it up amid concerns the French would be accused of squandering public money on a “foreigner’s tomb”.

A handwritten note among newly declassified State files shows a sister of Alan Dukes, former Fine Gael leader and government minister, “mentioned to the Irish embassy that Oscar’s tomb was in a mess” after a trip to the Père-Lachaise cemetery in the French capital.

The note, dated February 23rd, 1989, was sent to Geoffrey Keating in the cultural section of the Department of Foreign Affairs.

It noted the government was sending a team of stonemasons to Paris to restore the Irish College in the spring of that year and suggested they could “take in Oscar’s tomb at the same time”.

In a letter to Keating in March, the “titular owner” of the tomb – whose name has been redacted – writes about being “delighted and somewhat taken aback by your phone call the other day about Oscar Wilde’s grave”.

Keating implied during the phone call, the letter notes, that it might be possible for the team of Irish stonemasons to “do some remedial work on Oscar’s tomb while they were there”.

The problem, you see, is not so much one of cleaning the tomb as preventing people defacing it each time the cleaning is done

The individual agreed “in principle” that “both myself and the Ross family, who also have an interest in the monument, we would be delighted if such restoration work could be done”.

Wilde was originally buried in a pauper’s grave at Bagneux. But Robbie Ross, Wilde’s friend and literary executor, bought the Père-Lachaise plot and had him moved there. The Ross family continue to look after the plot.

It had long been daubed with graffiti by adoring fans and a cult grew up around leaving lipstick kisses on the monument, with each cleaning making it more porous and closer to irreparable damage.

The owner went on to say approaches had been made to various authorities in France to see whether they would be prepared “to afford the tomb some protection in the long term and I am hoping to have an indication of their feelings on the matter within the next month”.

“The problem, you see, is not so much one of cleaning the tomb as preventing people defacing it each time the cleaning is done,” the person wrote.

The tomb owner goes on to predict three possible responses from the French authorities: they would wish to have nothing to do with it; they would give the monument some legal protection if handed over “in a clean state”; or they would take on the restoration and protection with “no strings attached”.

In this way . . . the French could not be open to any immediate accusation of using public money on a foreigner’s tomb

So as not to jeopardise “chances of success with the French by hasty decisions”, the individual suggested waiting until the authorities respond before committing the Irish stonemasons to the job.

An agreement could then be struck so the Irish restored it and French took on protection, it is suggested.

“In this way, a very generous gesture would have been made on the part of the Irish government, the French could not be open to any immediate accusation of using public money on a foreigner’s tomb and it could well be achieved more rapidly than if several French government departments were involved, as would inevitably be the case with restoration then classification/protection,” the letter adds.

Replying later that month, Keating says he copied the letter to the embassy in Paris “explaining that you are anxious that no moves be made which might preempt any response from the French side”.

The embassy would be happy to make “overtures” to French authorities in due course.

In April, the tomb owner had made contact with the local Director of Monuments Historiques and an official dossier was being gathered, which is necessary before any tomb is registered for protection.

The French authorities “appeared quite favourably disposed to the idea”, it is noted.

It was further noted that the suggestion of the Irish stonemasons carrying out the work was “met with some enthusiasm” so the embassy should make its overtures to the authorities “fairly soon”.

More than two decades later, in 2011, some 111 years to the day after Wilde’s death, his restored tomb was officially unveiled, thoroughly cleaned and surrounded by a discreet glass screen to prevent further damage.

It the most-visited grave in Paris’s most famous cemetery and has since been designated by France as a historic monument.

The Irish State funded the renovation.