State papers: The six Irishmen were jailed for life in 1975 after being wrongfully convicted of the murders of 21 people in IRA bomb attacks on two pubs 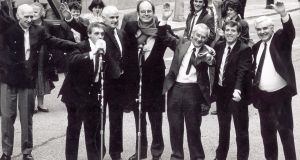 The British government was reluctant to release the Birmingham Six because of pressure from Tory hardliners and concerns it would cause a “scandal” in the tabloid press, a senior Home Office official admitted to an Irish diplomat 30 years ago.

In May 1989, two years before the six men were eventually freed after 16 years in jail for a crime they did not commit, Irish diplomats met with John Chilcot, then a “key” adviser in the Home Office about the case.

The meeting in London was “understood to be off the record and confidential”, according to official notes newly declassified and released into the National Archives.

The Irish delegation pressed for an “amelioration of prison conditions” for the six – Paddy Joe Hill, Hugh Callaghan, Gerard Hunter, Richard McIlkenny, William Power and John Walker – and as early as possible a release date.

The six Irishmen were jailed for life in 1975 after being wrongfully convicted of the murders of 21 people in IRA bomb attacks on two pubs in Birmingham the previous year.

Chilcot – who later went on to chair the Iraq Inquiry – was told the Irish government was under constant pressure to bring the case to the European Court of Human Rights “but had consciously exercised restraint”.

According to the notes, Chilcot responded “referring to the constraints on the Home Secretary’s freedom of manoeuvre”.

“Chilcot – choosing his words carefully – spoke of the need to ‘avoid giving scandal’,” the notes state. (“There is clearly a concern in the Home Office about possible tabloid exploitation of any early release of the Six, and indeed Chilcot implied also nervousness about criticism from hardliners within the Conservative Party.”)

One of the Irish diplomats present suggested successive de-categorisations of the Six – from Category A prisoners to Category C – which “should help to protect the Home Secretary [Douglas Hurd] against tabloid excesses.”

Earlier that year, an Irish diplomat in London reported back to Dublin on similar sentiments expressed by David Lidington, then political adviser to Hurd and more recently Britain’s de facto deputy prime minister.

During a dinner in January 1989, Lidington told Richard Ryan, then based in the Irish embassy in London, that the mood in the Tories was “very bloody on capital punishment and very bloody at the moment on ‘Irish terrorism’ (as they would describe it)”.

“Lidington offered the view (as previously) at a strictly personal level that the Birmingham Six look more guilty than the Guildford Four.”

There was a review of the Guildford Four case ongoing at the time prior to their release in October that year.

Lidington asked the Irish government, through Ryan, not to make “triumphalist” statements if a decision was made in favour of the Four’s case being referred to the Court of Appeal.

It was a “very delicate” matter, he said, and Hurd was “going to be criticised either way”.

Another diplomat in London reported back on a lunch with Richard Norton-Taylor of the Guardian “who has good connections in Whitehall and the intelligence community”.

“Norton-Taylor understands that Hurd also spent a lot of time ‘agonising’ over the Birmingham Six case and the renewed pressure which he knew he would face on that front following the Guildford decision,” the diplomat reported.

“He appears to have satisfied himself that, at the present time, no ‘new and material evidence’ has emerged which could justify further reference back to the Court of Appeal.”

According to senior Home Office contacts, the report states: “Hurd is extremely worried about the credibility problems posed for police evidence in court hearings as a consequence of the Guildford outcome.”

“He fears that lawyers for the defence will be able to sow doubts in the jurors’ minds and that there will be fewer convictions in future.”

In a coded cable from London to Dublin in October 1989, a diplomat reported meeting with the Guildford Four – Paul Hill, Gerry Conlon, Paddy Armstrong and Carole Richardson – after they learned of their impending release. They had been jailed for life following their convictions for murder in connection with IRA bomb attacks on two pubs in 1974 that killed five people.

Armstrong was “in a state of pleasant shock” but also “expressed apprehension about coming out after 15 years”.

Hill was “anxious not to have to go back to Northern Ireland” while Conlon said he was “determined not to be used after his release ‘by the wrong people’.”

“[CONLON] said the IRA had told the Balcombe Street Gang [the IRA unit behind the Guildford pub bombings] not to come forward initially,” the diplomat reported.

“He said ‘his mother votes SDLP and he hopes to do as well’.”