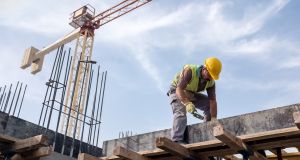 About €7.8 million worth of items were stolen from construction sites nationally in 2017. Photograph: iStock

Criminal gangs stole more than €6 million worth of tools from construction sites around the country in 2017.

In light of the figure, Irish builders have been urged to mark their tools and equipment to prevent thieves disposing of them.

Builders and others involved in the construction industry need to become much more vigilant to protect their property as it is clear that there are some very sophisticated criminal gangs targeting the sector, Chief Supt Con Cadogan of the West Cork Division said.

Speaking at the launch of the Garda’s ‘Secure It, Keep It’ campaign in Kinsale in west Cork, Chief Supt Cadogan said people working in the construction industry need to be aware of the importance of site security.

“We are appealing to everyone involved to go to the Garda website and take the Construction Site Checklist Challenge. In particular, I would appeal for everyone to mark their tools and equipment in some way,” he said.

“Recently, gardaí seized power tools from a car boot sale in the West Cork Division that had been stolen in Dublin. Thankfully the tools had the owners name engraved on them and they have since been returned,” he said.

Chief Supt Cadogan said that gardaí are very active in monitoring online marketplaces as well as car boot sales for the sale of stolen goods, but those working in the sector can help reduce the risk of theft with a few simple measures.

Among these are are setting up CCTV footage if builders are going to be working on a site for a prolonged period, ensuring that there is good security lighting at the site and that it is properly closed off with effective hoarding or fencing, he said.

Similarly, builders should keep the number of gates providing access to the site to a minimum, while access to the site should be controlled with visitors having to sign in and their vehicle’s registration recorded, while localised temporary security alarms should also be used, he said.

Crime Prevention Officer for the West Cork Division, Sgt Ian O’Callaghan said that about €7.8 million worth of items were stolen from construction sites nationally in 2017 with tools including high powered equipment accounting for €6.3 million of this figure.

“Every year we encounter construction sites being targeted. In the Southern Region alone, we have had 131 construction crime incidents which have been reported to gardaí this year,” said Sgt O’Callaghan who noted that last year over 43 per cent of thefts were from vehicles.

One of the most important things for anyone who wants to keep their machinery and tools secure is to put some sort of identifying mark by way of stamping, stencilling, etching or some other means then taking a photo of the item and emailing it to themselves so they have a permanent record.

“Every year, An Garda Síochána recover hundreds of thousands worth of machinery and tools, a lot of which goes unclaimed because the owners have failed to put some identifying mark on the equipment,” said Sgt O’Callaghan.