Miriam Lord: Symbolism not lost on Varadkar on emotional day 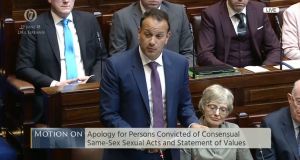 So the lesbian Government Minister turned to the gay Taoiseach and planted a soft kiss on his cheek.

Katherine Zappone was in tears. Leo Varadkar blinked back some of his own.

Then the Minister for Justice – son of a politician once nationally famous for his hardline conservative views – leaned across the front bench. “Well done,” he said to the Taoiseach, “well done”.

On Tuesday in Dáil Éireann, Charlie Flanagan, who now holds the seat of his late father Oliver J, apologised on behalf of the State to gay men who were criminalised because of their sexuality before the law was repealed in 1993.

The House was debating the 25th anniversary of the decriminalisation of homosexuality in Ireland and the issuing of an apology to the people convicted by a law which “criminalised the very essence of self”.

These were words uttered earlier by Fine Gael Senator James Reilly. The Seanad also marked the anniversary, facilitating Flanagan to make the first of two apologies he would deliver in the Houses of the Oireachtas.

Back in the Dáil, the leader of Fianna Fáil was next to speak.

“We fully support the all-party motion to pardon all those who were convicted under previous draconian legislation and we also believe that progress should be made on addressing legislative gaps that still remain for gay couples who have children” said Micheál Martin.

And on it went.

Everyone agreed that the apology was a very good thing, including the Independent TD Mattie McGrath who decided, despite some reservations, but on balance, “that the State should apologise to all those generations of gay men and women that it has wounded through its laws”.

However, he reiterated his view that he favours civil partnership for gay couples instead of marriage.

“I said it at the time of the referendum campaign that the loving relationships that exists between people of the same sex deserves to be protected from the point of view of the couple. From the point of the view of the couple, such relationships differ from those of heterosexual couples neither in emotional intensity, nor in the depth of their value.”

Mattie’s contribution went down like a lead balloon in the chamber and with the large crowd of people in the public gallery, many of whom fought the long fight down through the decades for LGBT rights.

As the speeches continued, Senator David Norris sat on his own at the decorative rail encircling the chamber, hunched over, resting his hands on the wooden ledge and his chin on his hands.

There was much praise for him from the TDs. He, along with some of the campaigners in the gallery, had been involved from the start.

He was centre of attention in the Seanad too. “If you’ve done nothing else in your life, and you’ve done a lot, you’ve done the State some service,” Senator Lorraine Clifford-Lee told him. She was one of just two Fianna Fáil Senators who attended the debate. The other was Kerry’s Ned O’Sullivan, who issued a personal apology for his own ill-informed views as a young man growing up in rural Ireland. “I feel a sense of guilt about this now,” he said.

Senator after Senator, they rose to pay tribute to Norris, who was far more subdued than usual as a result.

“It’s very embarrassing,” he declared at one point. Not that anyone believed him in the slightest.

Labour’s Ged Nash, who championed the motion, also mentioned the people in the public gallery who “fought for years for rights which I take for granted”. What was happening was “a long overdue and sincerely extended apology from our national parliament”.

Fine Gael’s Martin Conway made a point which was repeated by other speakers, both in the Seanad and later in the Dáil. It is one thing to change a law, he said, but “changing the hearts and minds off people is a wholly different matter”.

When the Taoiseach made special mention of Ann Louise in his Dáil speech, it was too much for Zappone and she couldn’t hold back the tears.

Who would have imagined, a quarter of a century on, that the opening Dáil speech in a debate on the decriminalising of homosexuality would be delivered by a gay Taoiseach?

“The fact that the Taoiseach was able to speak on this subject in such a personal way is quite a profound reflection on the charges that have taken place in Ireland over the past 25 years,” said Oliver J Flanagan’s son, himself living proof of that societal change.

Varadkar spoke of visiting the memorial to Harvey Milk in San Francisco last summer. “Milk was the first openly gay man to be elected to office, and he was assassinated 40 years ago by those who were offended by everything he stood for. His picture now hangs in the Taoiseach’s office.”

And he mentioned the people who helped change minds and change laws, the “people who fought for me before I did so myself”.

Then, his voice wavering, the Taoiseach remembered the day, three years ago, when Ireland voted for marriage equality. And how on that day the bench in Dublin’s Fairview Park where a gay man, Declan Flynn, was beaten to death in 1982, was covered in flowers and notes.

In apologising to “men and women of all ages who tried to live and love and be themselves in a society where their identity was feared and despised”, the Taoiseach said the State cannot erase the wrong done to them. “What we can say is that we have learned as a society from their suffering.”

The crowd in the public gallery in the Dáil and in the Seanad considerably outnumbered the attendance in the chambers.

Maybe the poor turnout was because 25 years is such a long time ago and it’s all done and dusted now. But since this apology meant so much to the people who came to Leinster House to witness the occasion – and countless more in the real, wider world – it’s a pity so many public representatives didn’t bother showing up.

In a way, the real celebration was in the Seanad. Because while the symbolism of a gay Taoiseach in the Dáil for this anniversary was not lost on anyone, it was more about Norris, who carried the flag when it was neither popular nor profitable.

And so we had stories from Senators such as Colette Kelleher, who talked of her wonderful gay son, and Billy Lawless, who talked about his beloved gay daughter and his grandchild.

There was applause aplenty. And some bawdy stories from Norris, who could get away with pretty much anything on the day that was in it.

“But it wasn’t all grim,” back in the day, he insisted. “There was an awful lot of fun.”

And he preceded to tell how he was buttonholed at an event by a prominent anti-everything woman who told him, “We know you! You won’t be satisfied with homosexual decriminalisation. The next thing you’ll be wantin’ is homosexual marriage!”

To which Norris said he replied: “What a wonderful idea. Thank you very much, madam. If you’ve any further ideas, do please let me know.”

There was no applause in the Dáil, where everyone seemed a bit tired and Leo seemed a little overwhelmed.

But this was, in the words of Sinn Féin’s Caoimhghín Ó Caoláin, “another of those significant days”.

And the “old comrades”, as Norris called them, had cause to celebrate.

They all looked tired. But happy.

It’s been a long, long road.

* This article has been amended to correct an error. Independent TD, Mattie McGrath was quoted as having said that homosexual relationships differ in emotional intensity and value from those of heterosexual couples. In fact, Mr McGrath said the opposite. The mistake was made during a rehearing of a recording of his contribution.