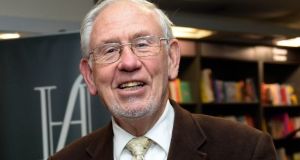 The founder of the MacGill Summer School has apologised for the lack of gender balance at this year’s conference, saying it was “working progressively” to amend the programme before next month’s event.

Speaking to The Irish Times on Tuesday evening, Joe Mulholland, director of the school, defended the number of women speaking at the annual conference in Glenties, Co Donegal, saying he had done his best to ensure a fair representation but that at times it was difficult to find “the person with the correct aptitude for some of the topics that are discussed in sessions”.

Speaking on RTÉ’s Today with Sean O’Rourke, Mr Mulholland apologised for his use of language saying it “was a totally wrong term to use and I apologise for that and withdraw it. It wasn’t what I meant, the right qualification or whatever, but it’s sometimes difficult.”

He said there was at least one woman on every panel, representing roughly 25 per cent of speakers, but that he recognised this was not enough.

“Efforts have been made by me over the years to have a gender balance. But then we have other balances that we look after as well, political, social economic balance and so on.”

‘Women have to be an equal part of this narrative’

Mr Mulholland said the number of women on the programme did not represent the number of women invited to the school but admitted he had “failed obviously from the point of view of gender balance”. He added that he would hate to abandon the school altogether and that local B&Bs and businesses depended hugely on visitors to the annual conference.

Wow, we don’t think we’ve seen such an array of male, pale and stale in a long time. For shame @MacGillSummerSc why would anyone (any woman especially) bother going to the School #wherearethewomen #womenhaveexpertisetoo #endmanels https://t.co/Mtg62vQrx1

Fix it @MacGillSummerSc fix it now or I’m not coming. Full stop. No debate. #macgill2018

Lots of great women in security and defence studies - legions better than me; lists and lists of experts. #fixit #macgill2018

I hope some contributors will take @Bentonra 's example and refuse to contribute until this is addressed #manel #fixit #forshame https://t.co/XEifi6s5hY

In fairness to the MacGill Summer School it’s not like there was some kind of women led grassroots political earthquake recently in Irish politics, which would have been both an interesting topic of discussion & a useful & easy way for Magill to find speakers. 🤨 https://t.co/T9CHJCAXHA

In a further statement on Wednesday evening, Mr Mulholland said: “Without question, women are under-represented numerically on our panels... This is something we very much regret.

“We are determined, in the short period remaining before MacGill 2018 commences, to do all that we can to redress this imbalance.”

In addition, he said the programme would include two extra sessions, one on the recent referendum on the Eighth Amendment, and the other on how to achieve gender balancing.

Social Democrat TDs Catherine Murphy and Róisín Shorthall had earlier said they would withdraw from their respective panels at the school unless significant changes were made to address the gender-balance of panels at the conference.

“The comments that Joe Mulholland made that it’s difficult to find women with the right aptitude is really quite offensive,” Ms Murphy said prior to his apology. “Women have to be an equal part of this narrative.”

One of the speakers, academic Ben Tonra, tweeted he would not attend the conference in response to a photo of the number of men speaking at the event.“Fix it @MacGillSummerSc fix it now or I’m not coming. Full stop. No debate. #macgill2018.”

Speaking on Tuesday evening, Mr Mulholland said the school did its best every year to ensure a good representation of women but that “sometimes the speakers - male or female - are not available”.

“At least this criticism has shown there is some interest in the school and it continues to strike a chord as sometimes it seems we are shouting into a void.”

“The reaction is unfair. . . the MacGill Summer school does not deserve this criticism. A huge effort goes into the subject matter that is discussed at the school and to find the relevant people to speak about it - women speakers are not being intentionally excluded,” he had said.

Mr Mulholland then pointed to some of the panels at the school which would feature two or three women out of four panellists.

“We strive to find the right balance between political affiliations, skills, ability and gender to make sure we get the best panels possible,” he had said.