Government apologises for hurt and stigma inflicted on gay men 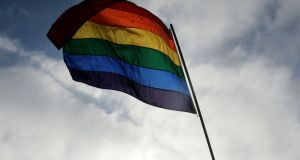 The State apology was in response to a motion tabled by the Labour party and accepted by all political parties. Photograph: Marcio Jose Sanchez/AP Photo

The Government has apologised to thousands of gay men criminalised by the State for their sexuality and for the hurt and stigma inflicted on them and their families.

Minister for Justice Charlie Flanagan offered a State apology to the men for the effect of laws denying them the right to live without fear and for the failure of tolerance in Irish society.

Taoiseach Leo Varadkar admitted the apology would not erase the wrong that was done but said society had learned from the men’s suffering.

The apology comes 25 years after homosexuality was decriminalised here following a lengthy battle by Senator David Norris and other campaigners.

Former president Mary McAleese told The Irish Times the Government apology was a recognition of the evil visited upon this country by homophobia being translated into law.

It would not give back what was taken from the men but it vindicated those who campaigned to end a culture of injustice and who turned the tide so comprehensively, Ms McAleese said.

“The overwhelming public endorsement of same-sex marriage in 2015 showcased an open and inclusive Ireland now grown deeply respectful of gay citizens whom it once so miserably oppressed. The apology is as much about the future as it is about the past.”

The State apology was in response to a motion tabled by the Labour party and accepted by all political parties. Both Houses of the Oireachtas agreed the laws were improperly discriminatory, contrary to human dignity and an infringement of personal privacy and autonomy which had caused multiple harms to those directly and indirectly affected.

It is not known how many men were criminalised for the offence of consensual sexual activity.

Fianna Fáil leader Micheál Martin said the long-term impact of criminalising gay men continued to be felt and many young men took risks in acknowledging their sexuality. He said there was still a journey to travel in ending the discrimination many LGBTI people face in this country.