More than 2,800 doctors withdrew from medical register between 2015-17 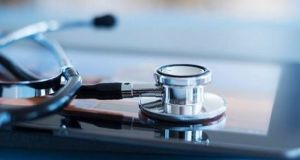 Doctors who left the register pointed to a lack of employer support, workplace understaffing and the hours expected to work in the context of the European Working Time Directive. Photograph: Getty Images

The healthcare system has an over-reliance on doctors who are trained overseas and is facing challenges in recruiting and retaining Irish personnel, the Medical Council has said.

The Council, which is the regulatory body for the medical profession, said on Thursday that more than 2,800 doctors with rights to practise in this country withdrew from the medical register between 2015 and 2017.

It said the main reasons cited by doctors for leaving the register included the expectation on them to carry out non-core tasks, lack of respect by senior colleagues and lack of flexible training options.

It said doctors who left the register also pointed to a lack of employer support, workplace understaffing and working hours .

Irish doctors with basic medical qualifications accounted for more than 42 per cent of those who gave reasons for voluntarily leaving the register.

A new Medical Council workforce report said most of these planned to practice in Australia, the UK, Canada, New Zealand and the USA.

“Reasons cited included moving abroad to do a fellowship, to support a partner undertaking a fellowship or to further their career. Financial reasons for not maintaining dual membership of medical regulatory organisations when working abroad, and maternity leave were also reported. “

“This is leading to an overreliance on overseas trained doctors, which is escalating as evidenced in this report. The cultural challenges within the Irish health system, which are highlighted in the report, also need to be addressed in tandem with an increase of health practitioner supply. Otherwise, retention will remain a growing issue.”

Medical Council chief executive Bill Prasifka said a high percentage of overseas doctors on the general register were not in training posts and did not have a career path or career progression.

The Council’s workforce intelligence report said in 2016 a total of 2,714 doctors enrolled on the register for the first time. It said most new entrants to the register were on the general division and educated outside of Ireland.

“Countries including Egypt, Sudan, Pakistan and Romania and the United Kingdom cumulatively contributed more new entrants to the Irish register of medical practitioners than Ireland did.

Responding to the report the Irish Medical Organisation said it represented “an alarm bell ringing to warn of a major crisis in our health system” and that the recruitment and retention crisis was inflicting real damage on services.

The Irish Hospital Consultants Association said the lower pay rates for consultants appointed since 2012 was “driving our much needed specialists abroad and is resulting in one in five permanent consultant posts being unfilled”.

“This is destroying the basic fabric of our acute hospital and mental health services .”

The National Association of General Practitioners said Irish doctors were going to Australia, Canada and New Zealand, where they felt valued, and where they could achieve their full potential as doctors.

“We must emulate the working conditions in these countries if we are to retain them, this is not rocket science.”

The Royal College of Physicians of Ireland said “a new culture of respect in the workplace and adequate staffing must be prioritised to address the critical pressures affecting doctor recruitment and retention”.