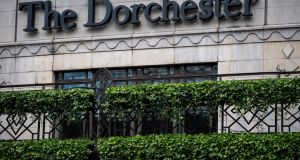 The Dorchester Hotel in London, owned by the Sultan of Brunei. Photograph: Chris J Ratcliffe/Getty Images

Attorney General Séamus Woulfe has postponed his induction into a prestigious international legal academy due to the ceremony being held at a London hotel owned by the Sultan of Brunei.

Mr Woulfe had been due to be formally inducted as a fellow of the International Academy of Trial Lawyers at an event in the Dorchester Hotel on Saturday.

A series of companies and organisations have boycotted the Dorchester in recent days due to the decision of the sultan, the hotel’s ultimate owner, to make gay sex and adultery punishable by stoning to death.

The International Academy of Trial Lawyers is holding its annual meeting in the hotel, where it is expected to pass a resolution strongly condemning its owner’s decision.

It is understood Mr Woufle consulted the Department of Foreign Affairs on the issue earlier this week and decided on Wednesday to postpone his induction. “In January 2018 the Attorney General had the great honour to be nominated for fellowship of a body known as The International Academy of Trial Lawyers,” a Government statement said. “The academy is a prestigious body of trial lawyers, with the majority of fellows from the United States, but with a limited number of fellows from over 30 countries throughout the world. A small number of Irish barristers have been inducted as fellows of the academy.

“The Attorney General’s trip has been postponed and his formal induction will occur at a time and place yet to be determined”.

The issue of Mr Woulfe’s attendance had been raised by Sinn Féin senator Fintan Warfield, who said the Programme for Government has a commitment to protect and uphold human rights. “Sinn Féin welcome the news that the Attorney General will not attend the event at the Dorchester Hotel. The Sultan of Brunei should know that Ireland rejects homophobia and sends its solidarity to oppressed people under his absolute rule.”