Reviews of domestic homicides could be ordered under new Bill 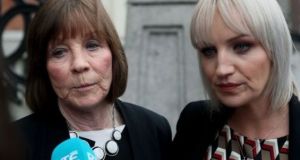 Reviews of domestic homicide cases such as the murder of Clodagh Hawe and her three sons by their husband and father could be ordered following the introduction of a Fianna Fáil Bill to amend the current law.

The party’s justice spokesman Jim O’Callaghan said there was a need to change the way such incidents are viewed.

“In many respects the way we deal with them in Ireland is to regard them as tragic events, which is understandable. We move on and nobody really talks about it,” he said.

The Domestic Violence (Amendment) Bill provides for a multidisciplinary review of cases to see what lesson can be learned and “if we can detect these offences and prevent them from happening in the future”.

Based on similar legislation introduced in the UK in 2011, the Bill provides that the Minister for Justice or Garda Commissioner can order a review where the death was caused by “the violence, abuse or neglect of another person to whom the deceased was related, with whom the deceased was in an intimate personal relationship or who shared the same household as the deceased”.

He said in the UK the police, social services and local authorities “get involved in trying to produce a report on how these events occurred”.

He stressed that the report was not about attributing blame

“Sometimes in Ireland we are desperate to attribute blame to individuals.”

The aim instead was to “find out if lessons can be learned and if we can detect these offences and prevent them from happening in the future”.

Mr O’Callaghan said the Bill originated from the murder of Ms Hawe and her sons Liam, Niall and Ryan and “the very powerful interview” her mother Mary Coll and sister Jacqueline Connolly gave to Claire Byrne on RTÉ in February.

The Dublin Bay South TD said the Bill goes further than UK legislation to include not only Ms Hawe and her sons’ case, where the suspect killed himself, but also incidents of domestic homicide with a subsequent criminal conviction.

He said the current situation makes it extremely difficult for families such as Ms Hawe’s and many others, who have “no answers for how these tragic and terrible events occur”

The Garda take statements from the individuals who come upon the crime scene and a coroner has very limited role in determining what happened, confined to how, where and when the victim died.

The legislation would provide for a multidisciplinary review by An Garda Síochána, the Child and Family Agency Tusla and other agencies such as the Probation Service, the HSE or a Government department.

Mr O’Callaghan called for the Government’s support for the legislation because it would require the resources and involvement of the Department of Justice. “We need to get domestic homicide reviews onto the Statute Book.”