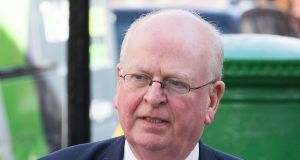 Senator Michael McDowell called for a break from 2pm to 3pm to have lunch in the members’ restaurant rather than a sandwich. Photograph: Tom Honan

What time Senators take their lunch and whether it is a proper meal or a sandwich break provoked a row in the Upper House and led to two votes, one of which was tied.

This outcome resulted in the Cathaoirleach taking the virtually unprecedented decision to vote with the Opposition.

The row – which developed during the Order of Business, when the House decides its programme of work for the day – centred on the time it would adjourn during debate on the controversial Judicial Appointments Commission Bill.

Independent Senator Michael McDowell had called for a break from 2pm to 3pm to have lunch in the members’ restaurant rather than a sandwich.

But Fine Gael Seanad leader Jerry Buttimer rejected the amendment, telling Mr McDowell the members’ restaurant was closed between 12.30pm and 2pm but “the canteen is open for hot food, not just sandwiches”.

When Independent Senator David Norris said there should be a proper meal break, Mr Buttimer said he was sure Mr Norris had a “good speed dial facility on his phone and can call for pizza”.

An electronic vote was called and the Government won 19 to 18, at which point the Opposition sought a walk through vote. This was tied 21-21, necessitating a casting vote from Cathaoirleach Denis O’Donovan.

It is the precedent that the chair would vote with the Government but for the first time in decades, the Cathaoirleach sided with the Opposition and voted for an hour’s lunch at 2pm.

Later, during debate on the legislation, a vote was called on an amendment by Mr McDowell that any member of the Judicial Appointments Commission who is eligible for appointment to any judicial office should not have to make an application to the commission to be considered for the position.

When Mr McDowell called for the amendment to be passed, Minister for Justice Charlie Flanagan called for a No, but was informed he had no vote in the Seanad.

The Cathaoirleach said “there is no member from the Government side here”.

Mr Flanagan called for a quorum but was told he could not act for the Chamber and the amendment was passed.

Mr Flanagan, asked afterwards for comment, said “to quote the children’s book series Lemony Snicket, it was another series of unfortunate events”.