Healy-Rae accused of behaving like a ‘leprechaun’ at committee

Michael Healy-Rae has been accused of a “craven leprechaun performance” for his conduct in front of the Oireachtas Committee by the broadcaster Ivan Yates. Video: Virgin Media, The Tonight Show/ Oireachtas TV 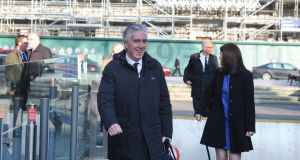 Independent TD Michael Healy-Rae has been accused of a “craven leprechaun performance” for his conduct in front of the Oireachtas Committee investigating the finances of the Football Association of Ireland (FAI).

In furious exchanges on Virgin Media’s Tonight programme, presenter Ivan Yates told Mr Healy-Rae he had described him as a “national embarrassment” in the past.

Mr Yates added that he was further embarrassed at the “obsequious” manner Mr Healy-Rea had spoken to FAI executive vice-president John Delaney at the Oireachtas Committee on Transport.

Mr Healy-Rae praised Mr Delaney for bringing football facilities for Co Kerry and said there would be a welcome for him in the county any time.

Mr Healy-Rae, who is not a member of the committee, did not ask any questions.

His performance infuriated Mr Yates: “It was a craven leprechaun performance from you today and I was embarrassed for you,” he said on Wednesday night’s show.

“I was embarrassed for you that a member of our parliament would be so obsequious to someone who was not answering questions”. He also said Mr Healy-Rae didn’t ask one question.

Mr Healy-Rae countered by telling Mr Yates that his rudness “goes beyond belief if that’s the way you invite a person on to your show and you go slapping the table like a spoilt little pup”. He also accused him of being an “arrogant bully” and a “common thug”.

He added: “I’d ask you a question, ‘who do you actually think you are?’”

Mr Yates repeated that Mr Healy-Rae’s performance in front of the committee was “shocking. It was craven and it was leprechaun just becauses you just want a few quid for a few goalies nets in Kerry.”

Mr Healy-Rae said funding came to Co Kerry for football facilities in the country because of the “commitment to grassroots that people like John Delaney has had over the years.

“It wasn’t being fairly distributed before and we need people like John Delaney who has an interested in the outer regions.”

During eight hours of hearings, Mr Delaney spoke for four minutes. He refused to take any questions about the €100,000 cheque he gave the association when it was having cashflow problems.

He also refused to take any questions about his role as chief executive of the FAI for 14 years.

He told the committee that “prejudicial comments” made by its members about him, along with legal advice he has received, precludes him from answering questions about the payment.

Kerry District League and FAI senior council member John O’Regan said they had got €750,000 in recent years from the Sports Council for soccer facilities but had raised three times that amount. He suggested the help that they had received went far beyond a few goalies’ nets.

Former Ireland international Niall Quinn told the programme that he was shocked when he was a member of the Sports Council as to how little the FAI was getting in capital grants in comparison with the GAA or the IRFU.

He said he had told Mr Delaney about “upping their ideas” to get a fair share of capital grants given that soccer is the biggest participation sport in the country.