New research finds that among people with third-level education, 27 per cent concealed negative attitudes towards black people coming to Ireland 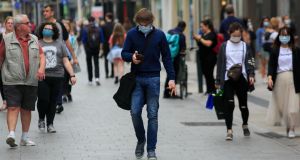 The study found that whereas 66 per cent of people openly supported more black people coming to Ireland, this dropped to 51 per cent when respondents could conceal their attitude. Photograph: Gareth Chaney/Collins

People who hold racist views or negative attitudes towards minorities are more likely to conceal them if they are more highly educated, a new study suggests.

Among people with third-level education, more than a quarter (27 per cent) concealed negative attitudes towards black people coming to Ireland, according to the survey, which is published on Wednesday by the Irish Human Rights and Equality Commission and the Economic and Social Research Institute (ESRI).

Just under one fifth (22 per cent) of those in this education bracket hid negativity towards Muslims coming to Ireland.

More than 1,600 people were surveyed for the study, called “Hidden versus revealed attitudes: A list experiment on support for minorities in Ireland”.

The study found the extent to which people conceal their negative views on immigration depends on the group being asked about, as well as the gender, age and educational background of the respondents.

Social pressures to exhibit tolerance are much greater when people are asked about black people than when asked about Muslim people coming to Ireland.

Whereas 66 per cent of people openly supported more black people coming to Ireland, this dropped to 51 per cent when respondents could conceal their attitude.

While previous surveys have shown that people with higher educational attainment are more positive towards minorities in Ireland and elsewhere, this report reveals that this is largely because highly educated people who hold negative attitudes are more likely to conceal them, the authors say.

Concealing negative views is almost twice (19 per cent) as prevalent among those aged 18-49 compared to those aged 50 or over (11 per cent) regarding the question of black immigration.

However, the younger group are more supportive than the older group even when asked anonymously (59 per cent versus 40 per cent).

There are no age differences in anonymously expressed support for Muslims coming to Ireland – more than half (about 53 per cent) of each age group support this.

In terms of gender, 21 per cent of men conceal negative opinions towards more black people coming to Ireland, compared to 10 per cent of women.

1 Covid-19: Taoiseach warns of restrictions in cities as hospital cases pass 100
2 All third level colleges moved to Level 3, most tuition moved online
3 People asked not to cross Border as Donegal prepares for Level 3 restrictions
4 How Finland kept Covid-19 in check and protected its economy
5 Aer Lingus staff say they are living in ‘near poverty’ and unable to cover rent
Real news has value SUBSCRIBE