Event was opened by group chief executive David Solomon, and attended by 2,000 socialites and financial professionals 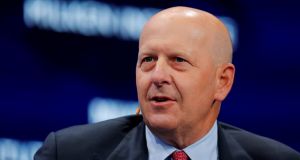 The opening set at the Hamptons charity concert was by Goldman’s chief executive officer David Solomon, who moonlights as DJ D-Sol

New York health authorities will investigate a Hamptons charity concert opened by Goldman Sachs chief David Solomon and headlined by the Chainsmokers after footage showed crowds of partygoers, according to governor Andrew Cuomo.

Mr Cuomo said he was appalled by “egregious social distancing violations” seen in videos of the Saturday night event in Southampton. “We have no tolerance for the illegal and reckless endangerment of public health,” he said, noting the department of health will lead the inquiry.

The event was held on a field on Saturday night, and billed as a “safe and sound drive-in concert”, with attendees expected to enjoy the music by their cars and in designated spots.

About 2,000 people turned up for the performance with an opening set by Goldman’s chief executive officer, who moonlights as DJ D-Sol, and the Chainsmokers as the main act.

Videos shared by revellers appeared to show groups gathering near the stage. Some concert-goers without masks congregated outside cars to party with friends. Southampton town supervisor Jay Schneiderman was also one of the performers at the event, and Southampton village mayor Jesse Warren was MC.

A spokesman for Goldmans said Mr Solomon “agreed to participate in an event for charity in which the organizers worked closely with the local government and put strict health protocols in place”.

New York was once the epicentre of the coronavirus pandemic in the US before it eased there and spread to other regions. Officials have been cautiously reopening the state.

The organisers, In the Know Experiences, had pledged to abide by local and state health standards. They set up temperature checks, arranged for crews to clean portable toilets every 10 minutes and made frequent announcements about wearing masks when moving around the venue.

About 500 cars were parked in spots that cost as much as $25,000 (€21,000), with the top tier including an air-conditioned RV and private bathroom. Masks were encouraged, but not required, next to vehicles, according to an email sent to ticketholders.

The rare chance to party drew socialites, financial professionals and other notables. Altogether, a couple of thousand people flocked to the event, dancing on the grass and on the tops of vehicles.

“Standing up there and watching the sunset, looking out over this huge field of cars and people on their cars, it was absolutely beautiful,” Mr Solomon said on Monday in an interview before Mr Cuomo’s announcement.

“The group that put this together did an incredible job in a difficult environment. If we work together and are thoughtful we can do things that feel more normal and allow us to live with this virus safely.”

Seth Kaplan, co-founder of In the Know Experiences, had said it was a trial run for concerts his company hoped to produce in Miami and other places.

Any profits from the Hamptons event will be donated to No Kid Hungry, Southampton Fresh Air Home and the Children’s Medical Fund of New York.

1 Over 400 complaints from migrant workers at meat plants lodged with WRC
2 John FitzGerald: Exchange rate control no panacea for economic crisis
3 AerCap defers $300m in rents owed by airlines whose fleets are grounded
4 Ten of the most mysterious aircraft disappearances
5 Musgrave acquires Belfast-based Drinks Inc for undisclosed sum
6 Finally giving in to the dashcam craze? This’ll get you up and running
7 Coronavirus: We must save lives but we also need to live
8 MSD buys Takeda biologics plant in Dunboyne
Real news has value SUBSCRIBE