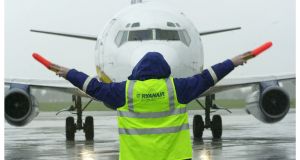 Ryanair filed an advertising complaint against a company that offers to manage compensation claims for flight delays, questioning its right to interfere with the airline’s internal procedures.

MyRefund.ie offers to pursue compensation from airlines for customers on a “no win, no fee” basis.

It targets those who experience delays of more than three hours within the past six years, telling them they could be entitled to compensation of up to €600 under EU law.

However, taking issue with the company’s approach, Ryanair alerted the Advertising Standards Authority for Ireland (ASAI), which partly upheld and partly rejected the airline’s concerns.

In its claim, the airline explained its contractual relationship with ticket holders in which all compensation claims must be submitted to it directly, allowing 28 days for a response. It said the MyRefund approach was therefore misleading as it was contrary to the European Commission’s recommendation that travellers should contact their carrier first, before any third party.

Ryanair noted that a recent court case in the UK had upheld its right to operate that policy.

“They [Ryanair] considered that this was to the consumer’s detriment given the large fee deducted by MyRefund and at no point did MyRefund correct these fundamental misunderstandings.”

Passengers were being induced to breach the terms of contract they signed up to, Ryanair claimed. It said the advertising created the impression the service was “more beneficial than it actually was” given the 25 per cent plus VAT commission on processed claims.

However, responding to Ryanair’s grievances, MyRefund said the EU commission’s advice pointed out that a consumer had the right to be represented by a third party.

“MyRefund considered that the complaint by Ryanair was part of a cost-saving exercise initiative by them as the less [sic] passengers that know about their rights, the less Ryanair would have to pay out,” the ASAI said.

The company also said it dealt with numerous airlines, that it had not singled out Ryanair, and that 40 per cent of its clients who had initially approached the airline directly had been “ignored or refused”.

In dealing with five separate but related issues around the advertising, the ASAI upheld two, partly upheld a third and rejected two.

It said there was no specific reference to Ryanair, and that while a company might require passengers to contact them directly this did not make the advertising of a possible third-party service misleading.

In a separate complaint, Ben Dunne Gyms was found to be in breach of standards by advertising a monthly membership fee without communicating a joining charge.

The company Nature & Harmony received a complaint regarding its claims that breast massage could reduce the risk of breast cancer and increase size, saying they were without any scientific evidence to support them.The ASAI upheld the complaint and told the advertisers to remove the claims until they were in a position to provide substantiation.

A total of 18 complaints against various advertisements were upheld in the ASAI’s latest round. Five separate reports were filed and upheld against Eir.