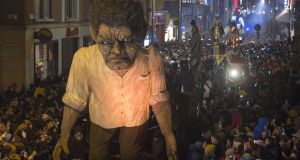 Tributes have been paid to five Galway teenagers who rescued a man from the river Corrib during the Macnas parade on Sunday night. Photograph: Dave Meehan/The Irish Times.

Tributes have been paid to five Galway teenagers who rescued a man from the river Corrib during the Macnas parade on Sunday night.

Seán Oliver (14) and four of his friends pulled the man from the fast flowing waters shortly after 6pm as thousands of people had gathered for the Halloween street festival.

The teenagers, who have sought to play down their actions, were in a rigid inflatable boat (Rib) and en route to tie up and watch the parade at the time.

With Seán Oliver, who is a trained boat handler and has been a member of Galway Sea Scouts, were friends Niall O’Neill (14), Samuel Healy (14), Dara McDonagh (14) and Brendan Chasseriaud (13).

Séan’s uncle Dave Oliver, who works with the Galway Fire Service and is an RNLI lifeboat coxswain, had just come off duty when he was alerted to a man in the water.

“I had just finished work and was down at the Claddagh with my family, and the place was lined with people waiting for the parade,” Mr Oliver said. “There was lot of commotion, and I could hear people shouting up towards Wolfe Tone Bridge that there was a person in the river. Some people might have thought it was part of the parade as there was so much noise at the time.”

Mr Oliver ran down towards the pier close to the Dominican Church and called out to his nephew in the Rib. Assisting him was Frank O’Connor of O’Connor’s pub in Salthill.

“It was dark, and they found it hard to see him at first. Next thing, they got him from the middle of the river and managed to haul him into the boat. One of the lads, Niall O’Neill, is doing a lifeguard course, and that really helped. They were all very cool and calm,”Mr Oliver said.

Galway Fire Brigade and ambulance personnel were down within minutes, and were on the scene when the Rib manoeuvred into the steps. Air temperatures were low at the time due to a northerly wind.

The man was given emergency medical treatment and taken by ambulance to University Hospital Galway, where he has made a recovery.

Séan Oliver’s father, Ciaran, is also an RNLI coxswain and has rescued many people from the river and Galway Bay.

“Seán has been driving Ribs for years and was in the sea scouts, and so all the training paid off, “he said. “But he couldn’t have managed it without the help of his friends, and that is what made the difference. It was just lucky that they were in the right place at the right time.”

Irish Water Safety (IWS) deputy chief executive Roger Sweeney said he would be nominating the five for the organisation’s “Just In Time Award” which recognises those who save others in difficulty in water.

“Thanks to the quick thinking of the young skipper, the teens acted quickly and selflessly to use the Rib that they were tying up at the time to effect a very quick rescue,”Mr Sweeney said.