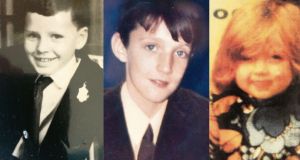 Peter Watterson, Philip Rafferty and Siobhan McCabe, from the book Children of the Troubles, by Joe Duffy and Freya McClements

The number of children killed during the Troubles in Northern Ireland has been significantly underestimated, according to a new book, Children of the Troubles.

Published on Thursday, it reveals that republicans were responsible for 43 per cent of children’s deaths, Loyalists for 27 per cent and the British army and RUC for 26 per cent of such deaths during the conflict.

Nine children who have never been publicly acknowledged as victims of the Troubles were uncovered by Irish Times journalist Freya McClements and RTÉ broadcaster Joe Duffy.

In all, 186 children aged 16 and under, including four unborn, were killed between 1969 and 2006, among them children including Jim Dorrian who were knocked down by British army vehicles in Belfast and Derry in 1970-71.

The book also features 23-month-old Francis McGuigan, who his family believe died from inhaling CS gas from a canister fired into their home in Ballymurphy in west Belfast in 1970.

It also includes 15-year-old Thomas Devlin, who was attacked and stabbed to death near his home in north Belfast in 2005.

In the introduction to Children of the Troubles, McClements and Duffy write, “At the time of their son’s murder they [Thomas’s parents] had been asked not to claim it was sectarian . . . they are in no doubt that Thomas was killed because of his religion, and he should be regarded as a victim of the Troubles.”

It is “incredible”, the authors write, that there is no single, official list of Troubles fatalities. “The closest is Lost Lives by David McKittrick, Seamus Kelters et al, which has made the single greatest contribution to our knowledge of the Troubles and our understanding of its consequences.

“It was the starting point for our research, and a work to which we referred constantly during the writing of this book; it is frequently cited in our pages, and we are forever indebted to its scholarship.”

None of the above mentioned children are included in Lost Lives, though this is in part due to a difference in criteria.

“While only road deaths which were known to have taken place during disturbances were included in Lost Lives, we believe that [these] deaths were nevertheless a result of the Troubles and should be included,” write McClements and Duffy.

The book also reveals that the proportion of children killed by the security forces was significantly higher than the percentage among victims of all ages.

According to Children of the Troubles, the British Army or the RUC were responsible for 26 per cent of children’s deaths, as compared to 10 per cent – based on Lost Lives – among all Troubles fatalities.

The majority of children – 42.5 per cent – were killed by republicans, and 27 per cent by loyalists.