Harris will treat ‘ageist’ attacks on him by consultants with contempt 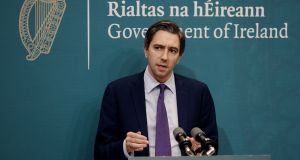 Minister for Health Simon Harris at Wednesday’s press briefing on Budget 2020. Last weekend, the leadership of the Irish Hospital Consultants Association passed a motion of no confidence in the Minister. Photograph: Alan Betson

Minister for Health Simon Harris has said he will treat personalised “ageist-type” attacks on him by hospital consultants with contempt.

The Minister linked criticism made of him by the Irish Hospital Consultants Association (IHCA) last weekend to his decision to invite the Irish Medical Organisation – which also represents medical specialists – to attend a first round of talks with the Government on pay for recent entrants and on healthcare reforms.

Mr Harris said the IMO was asked to attend talks first as it was affiliated with the Irish Congress of Trade Unions with which the Government negotiated the current public service pay agreement.

He indicated that the process would be expanded subsequently to include other organisations.

Last weekend, the leadership of the IHCA passed a motion of no confidence in the Minister and issued a statement saying he did not have “the authority, understanding, inclination or experience to deliver timely, quality hospital care for patients”.

Mr Harris said on Wednesday that “when you invite one representative body, the other gets upset, gets together a couple of doctors and decide a vote of no confidence in you”.

He said the IHCA represented many excellent doctors and superb clinical leaders. However he said “personalised ageist-type attacks will be treated with contempt by me”.

The Minister said the initial talks with the IMO on pay parity for consultants and reforms such as the recent Donal de Buitléir, report, which examines phasing out of private practice from public hospitals, would commence next Thursday.

Mr Harris said the IHCA should not dismiss the very important issues highlighted in the report on private practice in public hospitals.

“If we are to reform our health service we need to look at the facts of private practice in public hospitals. We are out of step with so many countries. I have been very clear that I do not think that is a sustainable position.”

Speaking at a briefing on Budget 2020, the Minister indicated that if an agreement was reached by Government with medical organisations , it would be funded.

However he said pay was not the only issue. On foot of a deal with the Government earlier this year, GPs had committed to doing other things. He said an accord with nurses would see many receive additional remuneration but there were also reforms the Government needed to see in order to implement its Sláintecare reform plans.