One of the lucky ones: looking forward after chaos of schizophrenia

World Mental Health Day: Vincent Geoghegan getting the housing and supports he needs 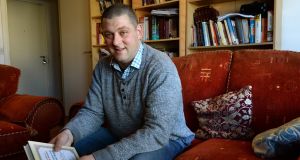 Vincent Geoghegan in his apartment home in Ballymun, Dublin, provided for him by the Housing Association for Independent Living. Photograph: Dara Mac Dónaill/The Irish Times

Vincent Geoghegan remembers the time before he was diagnosed with schizophrenia as “very interesting”.

“I was experiencing things that were unusual. I was reading the Bible, hearing voices, suffering delusions, things like that. At the time I didn’t know how bad it was, until mam insisted I see a doctor.”

At the time, he was an apprentice printer in his early 20s, and suffering stress. Doctors put him on medication but it didn’t agree with him. “I was putting on weight and I was pacing up and down and falling asleep all the time; that wasn’t very good.”

After being taken off his medication he suffered a psychiatric episode; spells in three different mental hospitals followed over the succeeding months.

What happens then marks Vincent as one of the lucky ones to get help with rehabilitation and make the adjustment again to regular life. A friend put him in contact with the Housing Association for Independent Living (Hail), a specialist charity that provides housing and other tailored supports for people with mental health difficulties.

In 2008, Hail housed him in a one-bedroom apartment in Ballymun, where he still lives. And whereas many mental health patients struggle to access support services, Geoghegan was linked to the local mental health team, where he says he has had the same consultant for over a decade and the psychiatric nurse is “brilliant to talk to”.

The resulting stability has helped him live independently, maintain his health, re-enter the workforce and study for a variety of qualifications.

A Hail support worker helped him get to know the area, buy furniture, sort out his finances and also worked with his mental health team on his personal recovery goals.

As a result, he has not been in hospital since. Crucially, even if he were to suffer a relapse and be admitted to hospital, his apartment will be kept for him. “So it’s not like the private rental sector (where he was at the time of his hospital admissions). God forbid if anything happened, I’d still have my tenancy.”

Geoghegan was speaking ahead of World Mental Health Day on Thursday.

Over the past decade, he has studied for a BA in theology and a diploma in drugs awareness, and held down various types of employment. Currently, he’s on a community employment scheme and acts as a peer worker for the charity, supporting other tenants.

With his medication now further reduced, he intends to take further courses. “Hail has been the cornerstone of my wellness. If I didn’t have it, where would I be?”