Piece with €20,000 estimate stolen from Lancashire school discovered in Dublin 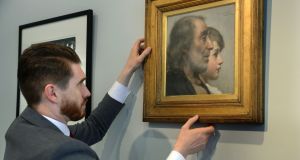 A painting by the 19th century Belfast-born artist John Lavery has appeared in a Dublin auction house 25 years after it disappeared from a school in Lancashire.

The painting, which is worth about €20,000, was sent over from England to Whyte’s auctioneers in Dublin’s city centre last week for an auction set to take place in December. However, on closer inspection, staff at Whyte’s discovered the small oil painting was the same artwork that went missing more than two decades ago.

Entitled Youth and Age and dated 1885, the Lavery painting was stolen about 25 years ago from Stonyhurst College, a Jesuit public school in Lancashire.

The Dublin auctioneer’s managing director Ian Whyte said the school had been notified of the discovery along with the Garda art and antiques unit.

“We hope that it will be returned to its rightful owner shortly,” he said. “Whyte’s are delighted to have assisted in its recovery.”

The son of a wine and spirit merchant, Lavery was a prominent member of the innovative Glasgow school of artists and enjoyed a career stretching across the UK, France and Ireland. He was also knighted.

He held the posts of president of the Belfast Art Society and governor of the National Gallery of Ireland and in the 1930s became an honorary freeman of Dublin. His work appears in major public art collections throughout the world including at the Tate Gallery, Musée d’Orsay, Uffizi Gallery and National Gallery of Victoria, Melbourne.

The discovery of Lavery’s 1885 oil painting coincides with the reappearance of an 18th century silver chalice worth about €10,000 which went up for auction in Dublin last week, 21 years after it was stolen from Ardee, Co Louth.

The artefact, which was kept in a safe, was stolen during a burglary in 1998 in Ardee town. However, authorities were alerted last week after the chalice appeared at an auction in Dublin.

Mr Whyte said most silver that survives from the 18th century comes from churches and monasteries, though a small number of secular pieces exist. The artist’s mark on the chalice increases it value while its vintage also contributed to the estimate.

In this case the artefact – mistakenly described by gardaí as 17th century – would be worth about €10,000, he said.