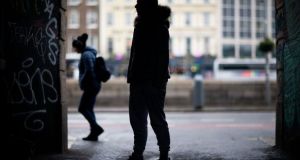 Homeless figures in Ireland have remained above 10,000 for seven months. Photograph: Tom Honan

The number of people without a home in Ireland continues to rise with the latest official figures showing 10,338 people are relying on emergency accommodation.

The figures include 1,726 families while the number of children across Ireland without a home has risen by a quarter in the last two years.

In July the number of affected children increased by more than 100 and the total went up again the following month.

In response, the children’s charity Barnardos said more than 170 children have become homeless since schools broke up for the summer holidays.

“August is a time when children should be excited to return to school to share their summer adventures with their classmates.

“Instead a child is having to decide whether and how to share the trauma of experiencing homelessness,” said chief executive Suzanne Connolly.

A year ago the number of people recorded as homeless stood at 9,527 while the total was 8,270 in August 2017. The total number of homeless people has remained above the 10,000 mark for the last seven months despite Government efforts.

The figures are contained in the latest Homeless Quarterly Progress report from the Department of Housing.

Speaking at a conference organised by the Simon Communities on Monday, Minister for Housing Eoghan Murphy said he would be advocating budget measures to address the crisis.

He said “in most areas of Irish life, Brexit is dominating the discussions” and he viewed it as “absolutely essential” that prudence continues to guide budget decisions.

“As housing minister, it is my responsibility to secure a budget that will see more homes being built. We will have a budget that will ensure when our teams go out on the street, they can help people. That’s what the housing budget is going to be about,” he said.

The latest figures show the highest homeless numbers in Dublin with 4,312 requiring emergency accommodation. The southwest region, including Cork, was second highest at 583. Galway accounted for 311 homeless adults and Limerick for 255.

Mr Murphy has said “a huge amount of time and resources” has been dedicated to the housing problem including investment in so-called family “hubs”, further emergency places and interaction with local authorities to “find new emergency solutions”.

The Government has ring-fenced €5.3 billion for housing and homelessness measures until 2021.

Focus Ireland director of advocacy Mike Allen said, however, that the only solution to a problem that deepens every year is to build more houses than are currently being completed.

“It’s continuing to head in the same direction,” he said of Monday’s figures. “You could go through it and find some small pieces of positive information which is all important but the actual general direction is continuing. It’s getting worse more slowly, which is welcome.”

Mr Allen said new home building rates of between 30,000 and 35,000 a year have been highlighted by both Ibec, the business representative organisation, and the Economic and Social Research Institute (ESRI), as necessary to meet demand and turn the tide.

However, he said, the Government has set an overall target of 25,000 and is likely to deliver on about 22,000, including both private sector and social housing.

“You are not going to have a lasting solution until you actually start building much faster,” he said.

It includes a pledge to deliver an additional 50,000 social housing units by 2021; “meet the housing needs” of an additional 87,000 households through the Housing Assistance Payment (HAP) scheme and the Rental Accommodation Scheme.

It says since 2016 the scheme has delivered over 21,000 built, bought or long-term leased homes and, with the addition of rental supports, has assisted almost 72,000 individuals and families in finding somewhere to live.