Government yet to move on road to Seanad reform

Report includes draft legislation for recommendations to be implemented without delay 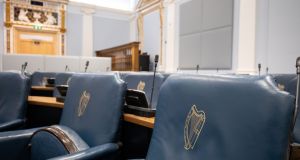 The Government has yet to take the first step on long-promised reform of Seanad Éireann, almost 10 months after the implementation plan was published.

The latest report to reform the Upper House was published last December by an all-party committee chaired by Senator Michael McDowell. It included draft legislation that would allow its recommendations to be implemented without delay.

However, the Government has yet to move on the report amid suggestions that Taoiseach Leo Varadkar favours postponing reform. He expressed reservations about the report just before the summer recess, and said he still personally favours having only one chamber, the Dáil.

Minister of State for Local Government John Paul Phelan has insisted, however, the reforms will proceed, and has said the Second Stage debates on the Seanad reform legislation will begin early in the new Dáil term. “I can confirm that is the official Government position,” he told The Irish Times.

Mr McDowell said the Government had not made any decision about it yet even though the Programme for Government had committed it to reform in this area.

“I would regard a reneging by the Government on this as a very serious breach of faith and incapable of honest explanation given that the Taoiseach established the all-party committee which I chaired and approved the very clear terms of reference,” said Mr McDowell.

The McDowell report is the 14th report published over the past 80 years setting out how the Seanad’s antiquated, opaque and elitist election process could be modernised. The reforms also suggested increased powers and responsibility for the 60-member chamber.

Mr Varadkar’s predecessor as taoiseach, Enda Kenny, brought forward a referendum to abolish the Seanad in 2013, but that was defeated by a narrow margin.

In 2015, a group chaired by former senator Maurice Manning proposed a series of reforms, all in keeping with the Constitution. The Constitution provides for the establishment of five vocational panels (which must be retained even though they are considered outdated), for seats elected by university graduates, and for the taoiseach of the the day to nominate 11 seats.

The Manning report recommended that all citizen be eligible to vote for 36 of the 60 seats, with a further 13 being voted for by the present college comprised of TDs, Senators and councillors.

Senator McDowell’s all-party committee broadly accepted the Manning recommendations with slight variations. It did reject one of its key recommendations on electronic voting and downloadable voting cards on the basis it might pose a cyber-security risk.

While the Government is committed to implementing the reforms, the Taoiseach has expressed some reservations. In exchanges with Fianna Fáil leader Micheál Martin and Sinn Féin leader Mary Lou McDonald in July, he said he supported the Seanad’s abolition.

“Many countries, including New Zealand, Finland, and Portugal, have unicameral systems which work well, but I accept the referendum result. The people have decided that the Seanad will remain. That matter is now settled. Whether that was a vote for reform or not is a matter of debate, as is whether the people were fixed on any particular type of reform. If we are going to proceed with reform, it needs to be the right reform.”

He also pointed to dissenting views in the McDowell report from Fine Gael, Sinn Féin and many Independent Senators. “Unlike many other all-party reports, this did not have all-party support,” he said.

Mr Martin accused him of a “bread and circuses” approach, promising what seemed like well-meaning reform but then refusing to implement it.