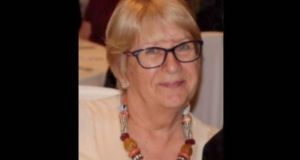 The body of a retired Co Donegal dentist has been found three days after she disappeared.

Gardaí located the remains of Ann O’Donoghue (68) at Horn Head near Dunfanaghy on Friday morning. Her body was taken to Letterkenny University Hospital for further examination.

In a statement gardaí said her death was the result of a “personal tragedy incident”.

Ms O’Donoghue lived in the Annagry area of the Gweedore Gaeltacht. She was originally from Dublin, but was well known as a dentist in Co Donegal for many years.

She was last heard from at 5.30pm on Tuesday. She left an “unusual text” on her mobile phone which worried her husband John who is currently in hospital, according to her daughter Alice Flanagan.

Ms O’Donoghue took her mobile phone, keys, purse and her debit cards with her, but left her dog Murphy at home.

Her car was located near the Ballyshannon area in the south of the county.

Ms Flanagan told RTÉ’s Ray D’Arcy Show on Thursday that her mother had never done anything like this before and had no underlying mental health issues.

She said her disappearance had “bamboozled the family” and the content of the text message, which she did not want to disclose, was also out of character.

She was a very fit and healthy woman who walked seven kilometres with her dog every day sometimes over bogs and beach terrain.

“She was enjoying her retirement and figuring out what to do with her time,” Ms Flanagan added.

1 Meath farmer discovers overnight rave on his land
2 Coronavirus: 188 new cases and no further deaths amid concern over eight counties
3 Work to stabilise land after ‘suspected tunnelling’ behind terrace could cost €300,000
4 Children removed from care of parents after claims they were ‘stripped and flogged’
5 Britain’s chief medical officers say entire country should move to Level 4
Real news has value SUBSCRIBE