Covid-19: Extension to rent-freeze will be short, says Minister

Minister for Housing denies rift with Attorney General, length of extension to be disclosed 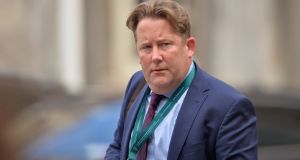 Minister for Housing Darragh O’Brien has said the freeze on rents and evictions will be extended from Monday. Photograph: Alan Betson/The Irish Times

An extension to the temporary ban on evictions and rent increases will be short-lived, following significant opposition to the plan from the Government’s legal advisor.

It is understood that the Attorney General, Paul Gallagher, raised significant concerns over the extension on constitutional grounds. Sources said that if an extension was to be introduced due to ongoing economic disruption from the Covid-19 pandemic, the Attorney General had indicated it should be for as short a time as possible.

On Friday, Minister for Housing Darragh O’Brien said the extension, which had “already been decided”, would be “relatively small”. He would not be drawn on the length envisaged.

The Dublin Fingal TD said he was working on a package of legislative measures to strengthen tenants rights. It is understood that he hopes to bring a memo to cabinet next week, in the hope that the legislation can be introduced before the end of the current Dáil term.

“The original emergency protection under public health was due to expire on the 20th, it won’t expire on the 20th… I want to make sure there’s no cliff edge, what we’re going to have is a graduated approach to some new measures which I think will be very helpful,” he said.

“We always have to look at how we can strengthen tenants rights, that’s something that’s very important for myself as well. We have temporary measures that the last government brought forward, that were never going to endure forever, it’s not sustainable to leave them there forever.”

A source said it is hoped and that new protections would kick in before the extended ban lapses again.

Mr O’Brien said on Friday that there had not been a “big row” over the issue with the Attorney General.

“We had a very detailed discussion last week with my colleagues and indeed with the AG at cabinet. I’m an optimist, I like to deal with people and work through on solutions, that’s exactly what I’m going to do,” he said, adding that he would bring a memo to cabinet on the issue on either Monday or Tuesday of next week.

The Minister said he had commissioned a report from the Economic and Social Research Institute (ESRI) into the issue of rent arrears during Covid. “The initial response we’ve had… is that effectively the arrears piece doesn’t look to be that significant,” he said, adding that he had not seen the final report yet.

Following reports of a row about the extension, the opposition called for increased certainty for renters. Calling for the extension of the ban, Labour Party housing spokeswoman Rebecca Moynihan said the government “cannot shirk its executive responsibilities by hiding behind the coat-tails of its legal advisors”.

Eoin Ó Broin, the Sinn Féin housing spokesman, said the extension was “a complete shambles”. He said the ban should be extended until October at a minimum, and ideally until the end of the year.