Three-member delegation will undergo test on return from Brussels 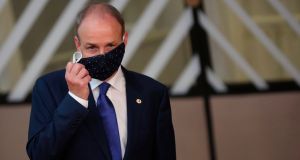 Micheál Martin prepares to make a statement on arrival for the European Union Council in Brussels on Friday. Photograph: Francisco Seco/Pool/AFP/Getty

Taoiseach Micheál Martin and two officials accompanying him to the EU summit in Brussels will not have to self-isolate on their return but will have to restrict their personal movements.

As essential workers who must undertake international travel as part of their work, the Taoiseach and his officials will not have to adhere to the 14-day self-isolation on their return, but a spokeswoman for the Government said the Taoiseach would restrict his personal movements.

Mr Martin will not be required to restrict his movements around work. He will be allowed to attend sittings of the Dáil in Leinster House and at the alternative parliamentary venue at the Convention Centre in Dublin along with meetings of Cabinet in Dublin Castle.

The Taoiseach and the two officials, John Callinan, second secretary general at the Department of the Taoiseach and his diplomatic “Sherpa” at international summits, and assistant secretary Helen Blake, will be tested immediately for Covid-19 on their return and again seven days later.

The three-member travelling party travelled to Brussels on an air corps aircraft on Thursday evening in order to minimise outside contacts during their trip. The Government Learjet is undergoing maintenance.

It is not clear yet when he will return as the meeting is open-ended and summits can last several days if there is disagreement.

Mr Martin has said that his attendance at his first face-to-face meeting with European leaders at the European Council meeting in Brussels, which began today and runs over the weekend, was essential as leaders planned to discuss an economic recovery fund to deal with the pandemic.

To prevent the spread of infection, the European Council has imposed restricted access in the Europa building where EU leaders are meeting with social distancing and hand sanitizers in place and face masks being worn.

The State’s acting chief medical officer Dr Ronan Glynn confirmed that the Taoiseach was doing “essential work” and said that he was sure the Taoiseach would act “in the safest manner.”

Dr Glynn has said that essential workers arriving back into the country should be restricting their movements when not conducting essential business.

Travel to Belgium in theory poses a greater risk of contracting the coronavirus disease than staying at home as the country has had a higher rate of Covid-19 infections than in Ireland.

The incidence rate of infection over a 14-day period was 9.9 cases for every 100,000 people in Belgium compared with Ireland’s 2.9 cases per 100,000 at the end of last month, according to figures produced by the European Centre for Disease Prevention and Control.

Dr Glynn said on Wednesday that Ireland’s figure has since risen to 3.9 per 100,000 people.