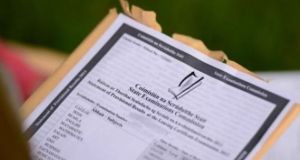 Leaving Certificate students have been “pushed from pillar to post”, the Union of the Students of Ireland (USI) has said.

Lorna Fitzpatrick, president of the USI, said the decision to delay the release of results until September, is “disappointing”.

More than 60,000 Leaving Cert students will this year receive their grades several weeks later than normal on September 7th, the Department of Education has said.

CAO offers for college places will be issued four days later on September 11th, which means many students may not start their third-level courses until October.

“I think these Leaving Cert students have been through enough. They’ve been through the flip-flopping on decisions about whether they would have exams in the first place or whether there would be calculated grades, and now this is yet another upheaval,” Ms Fitzpatrick told The Irish Times.

“They’ve been pushed from pillar to post with decisions from Government, and I think it’s really disappointing and it will have a massive impact on them.”

Minister for Education Norma Foley has said it is up to third level institutions to decide if they should defer commencement dates to facilitate first-year students seeking accommodation.

Ms Foley said she was confident the needs of students would be taken into consideration but that it was a matter for the third level institutions.

The Minister also defended her decision not to reveal details of the postponed Leaving Certificate results when questioned in the Dáil on Thursday saying she wanted to first inform the “variety of partners in education”.

Ms Foley acknowledged results being released in September will mean a short time frame for students to find accommodation.

“We are living in extraordinary circumstances. Extraordinary measures have to be taken. I absolutely want to acknowledge the patience of students, parents and teachers. I appreciate it is a stressful time, and I know this is a time of high anxiety,” she told RTÉ’s Morning Ireland on Friday.

When asked if colleges and universities might consider pushing back commencement dates to facilitate students, Ms Foley said she was confident third-level institutions would make arrangements about start dates.

For students who were unhappy with their results the appeals process would be turned around as quickly as possible with the opportunity to sit a written exam, she said.

There will be an opportunity for students to re-engage with the portal to confirm their wish to engage with calculated grades, she added.

The release date of September 7th is still in time for CAO and UCAS (the British system for college admission), and both organisations had been “incredibly engaged” with the process, she said.

Earlier on Newstalk Breakfast, Ms Foley said the reason the release date for this year’s Leaving Cert results had been delayed was to ensure all checks and balances were in place.

It was hugely important the class of 2020 know their calculated grades had the same integrity as every other year’s Leaving Cert, she said. The Minister added she was certain people would understand the delay had been necessary to ensure the integrity of the process.