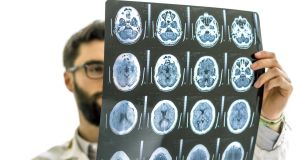 The issue of recurring illness is among several criticisms of the tribunal process which have been raised by the 221+ group in recent weeks. File photograph: Getty

Ministers have been warned that conceding on a key demand from a support group for women affected by the CervicalCheck controversy could force liability insurers from the Irish market.

This could, in turn, undermine the provision of cancer screening services here, Attorney General Paul Gallagher warned in a note to Cabinet last week on issues relating to the CervicalCheck Tribunal.

Government sources said the note addressed, among other issues, a request from the 221+ group that women be allowed to seek a further award from the tribunal if their cancer recurred.

Mr Gallagher argued insurers to companies who provide services essential to the screening process could withdraw cover if this was permitted, seeing the change as a sign that the Government was willing to make fundamental adjustments to the market.

Three sources with knowledge of the letter said Mr Gallagher warned this could result in these companies no longer offering services to the Health Service Executive, which would raise doubts about whether the State could continue running other screening services.

The issue of recurrence is among several criticisms of the tribunal process which have been raised by the 221+ group in recent weeks.

The group was established in 2018 to provide information, advice, and support to the women and families directly affected by failures in the CervicalCheck screening programme.

Relations between the Government and the 221+ group have deteriorated in recent weeks over design of the tribunal. Although the advice from Mr Gallagher is not binding, it may limit the State’s room for manoeuvre on key questions related to this politically contentious issue.

Earlier this month, the group told its members that there was nothing available to them in the planned CervicalCheck tribunal that was not available in the High Court. Officials in the Department of Health contacted the group last week after the issue was discussed at Cabinet.

Last week, campaigner Vicky Phelan said the group has no plans to return to talks with the Government “unless there is something new on the table or they will come back and meet us . . . halfway”.

She warned that very few women may end up using the tribunal, which was set up to be less confrontational than High Court cases.

In a recent letter to Minister for Health Stephen Donnelly, the group said it would support members who decided to “take the tribunal route rather than face the interminable wait for court time, or die waiting”.

The group also believes it has identified solutions to the issues that work within existing legal and constitutional parameters.

“We will of course support them in that choice and in their lives generally as they continue to live with the consequence of the State’s actions.”