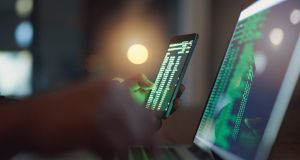 Encrypted phones which can be remotely cleared of data now being used in organised crime, say Garda. Photograph: iStock

The Garda is to focus significant investment in the coming months on cybercrime, which senior officers expect will soon be a major front in the fight against organised crime.

This will include the headhunting of cybercrime experts from the technology sector and the rollout of sophisticated password-cracking technology, which the force acquired earlier this year.

The increasing use of heavily encrypted, specialised phones, costing thousands of euro each, by organised criminals has been a source of frustration for detectives in recent years.

Even when phones are seized, unbreakable encryption keys and programs which can wipe all data remotely mean they are often useless as evidence.

In response, the Garda is increasing recruitment to its Cybercrime Bureau and almost doubling the number of staff.

Fifty new detectives are to be assigned to the bureau in the coming weeks. It will also hire 20 new civilian staff with expertise in cybercrime and encryption.

For the first time, the Garda is to specifically headhunt such experts from universities and technology companies.

There will also be significant improvements in the Garda’s technical capabilities. A decryption suite, recently purchased for about €500,000, has been installed in the bureau’s headquarters.

These developments will place the Garda’s cybercrime capabilities on a par with the UK’s National Crime Agency (NCA), sources said.

Separately, legislation is being planned to strengthen the Garda’s powers to intercept and decrypt messages.

It is understood Garda Commissioner Drew Harris has placed a particular focus on improving the force’s cyber capabilities and using them against organised crime. Earlier this year he appointed Detective Superintendent Paul Cleary, a veteran organised crime investigator, to head the cybercrime unit.

Mr Harris has called for gardaí to be given power to legally compel suspects in child abuse imagery investigations to hand over their passwords if a warrant is obtained. Gardaí should also be given an “electronic key” to allow access to encrypted platforms such as WhatsApp, he said earlier this year.

The need for hi-tech decryption capabilities was highlighted during garda operations targeting the Kinahan organised crime group whose members used custom-made “PGP phones” which were all but impossible to hack into and automatically deleted messages after a set period of time.

In response to queries, the Garda refused to comment on its new technical capabilities except to confirm the purchase of a decryption suite.

“The Garda National Cybercrime Bureau is currently in the process of internal recruitment to recruit members with the pre-requisite skills and academic qualifications to join the existing, highly skilled team,” a spokesman said.

“In 2021, An Garda Síochána intends to recruit civilian technician grade staff, to work in our digital forensics and cybercrime investigations units. This specific targeted recruitment of highly skilled civilian staff is unprecedented in its scale in AGS.

He added the Garda will also establish four cyber satellite hubs in Wexford, Cork, Galway and Mullingar. Some of the incoming staff will be deployed to these hubs but they will remain under the control of the National Cybercrime Bureau.