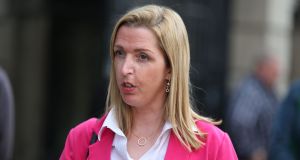 Vicky Phelan: she has said the CervicalCheck tribunal is “not fit for purpose”. Photograph: Nick Bradshaw

The Green Party has raised “serious concerns” around the CervicalCheck tribunal which is due to start its work on Tuesday.

A party source confirmed that an emergency parliamentary party meeting was held on Saturday to discuss issues raised by campaigners such as Vicky Phelan in recent days.

It is understood there was ongoing contact over the weekend between the Government parties and officials, as well as the 221-Plus group.

Ms Phelan said last week that the CervicalCheck tribunal is “not fit for purpose”, and warned that she feels forced to advise affected patients not to engage with the process.

She said that if Minister for Health Stephen Donnelly moved ahead without further engagement with patients “we will be forced to recommend to our members that they do not engage”.

It is understood Mr Donnelly spoke further with the group on Friday.

A Government source said “we hope that most if not all issues can be addressed to allow all women to partake in the tribunal”.

However, a Green Party source said on Sunday night that significant concerns remained.

Ms Phelan has said the group was worried about the adversarial nature of the tribunal, and requested that applicants who receive an award be allowed to return later should they suffer a recurrence of their cancer, in the same way that applicants before the Hep-C tribunal could return if their health deteriorated.

The group also expressed concern around the statute of limitations.

A Government spokeswoman said om Sunday night that Mr Donnelly held a “positive and productive meeting” with the 221-Plus group on Friday, and that discussions are ongoing.

In the Dáil last week Tánaiste Leo Varadkar said Mr Donnelly would direct the Government decision on whether to go ahead with the CervicalCheck tribunal on Tuesday or not.

“It is his judgment then whether the Government on Tuesday will make a decision to defer the establishment of the tribunal,” Mr Varadkar said. “Obviously I will be guided by him in that regard.”

The tribunal aims to provide an alternative to the courts for dealing with claims arising from the CervicalCheck screening controversy.