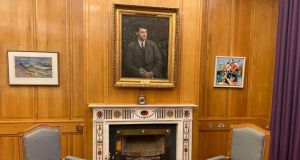 New Taoiseach, Micheál Martin has asked his predecessor, Leo Varadkar to put back a portrait of Michael Collins in the Taoiseach’s office to hang beside one of Eamon De Valera to symbolise unity 100 years on from the Civil War.

Photos appeared in the media last week of Fine Gael leader Leo Varadkar removing a portrait of Michael Collins from the Taoiseach’s office as he prepared to make way for his successor, the leader of the Fianna Fail party.

But now Mr Martin has revealed he asked Mr Varadkar to put back the portrait of fellow Corkman, Collins as the two parties enter a historic coalition and prepare to mark the centenary of the bitter Civil War over the Treaty.

“Leo Varadkar said to me during the week that he was taking down the portrait of Michael Collins and I said, ‘well actually, you might put it back up and I’m going to put De Valera next to him in the Taoiseach’s office’.

“I have a wonderful portrait of De Valera in my own office, the opposition office, and I am going to bring that over just to symbolise what has happened - Lemass is already there and we will find a place for a bust of Jack Lynch too.”

Speaking in Cork after returning for a brief visit to catch up with family and friends, Mr Martin acknowledged that the coming few years, marking the centenary of the Irish Civil War will be challenging for the new government.

But he expressed confidence that the new coalition arrangement involving Fine Gael and Fianna Fail, successors to the pro and anti-Treaty sides in the conflict, and the Green Party will be able to rise to the challenge.

“It will be interesting in terms of commemorating the Civil War, I’ve already had some discussions with people in relation to that and I spoke to President Michael D Higgins in Áras an Uachtaran yesterday about it.

“And it will have to be sensitive and be honest and it will have to commemorate events with a maturity that can educate and provide insights to the younger generation in terms of the formation and evolution of the state.”

Mr Martin said he believed that the new coalition could find inspiration for marking the centenary of the bitter conflict from some of the participants such as former Taoiseach, Sean Lemass who lost his brother, Noel in the conflict.

“It was Sean Lemass who said that it was often the generations that followed the Civil War that were often the most bitter - that many of the protagonists themselves weren’t as bitter themselves, that they deeply regretted it.

“And Lemass’s tribute to WT Cosgrave in the Dail when WT Cosgrave retired was an extraordinary tribute to the man and Lemass had suffered with the loss of his brother, Noel in the Civil War and I think that’s where we have to go.

“History to me is about revelation, you can’t look back judgementally - we can’t import today’s values back 100 years ago, we have to learn from it and try and understand it and not cover it up - history belongs to no party.”

Earlier, during the vote for Mr Martin as Taoiseach, Mr Varadkar had struck a similar note saying that Civil War politics involving enmity between Fianna Fail and Fine Gael were now clearly over as evidence by the new coalition deal.

Click here to read about Micheál Martin’s family history: from old IRA to the British army.

1 Coronavirus: Two more deaths confirmed amid concern over new clusters
2 Cluster of Covid-19 infections at Kerry ‘house party’ investigated
3 Paschal Donohoe’s victory seen as a revolt against EU’s ‘big four’
4 Brightest comet of the century visible in Irish skies for the next week
5 Reopening of pubs that do not serve food may be delayed beyond July 20th
Real news has value SUBSCRIBE